You are here: Home / PR Pulse / Why young people are better equipped for inflation
Previous Back to all Next 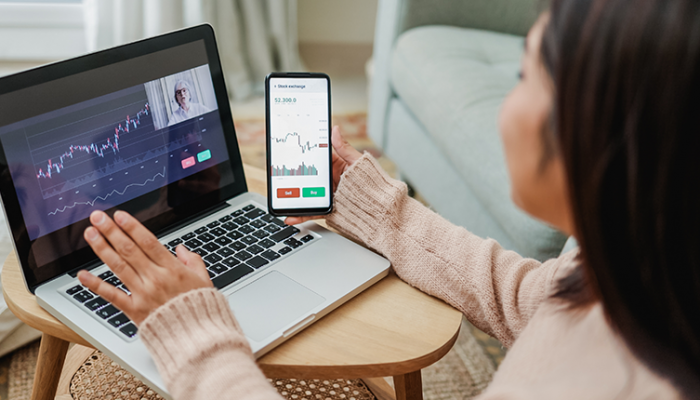 Amid a predicted two-year economic crisis, the financial future is often painted black for young Britons. However, with the rise of ‘fin-fluencers’ and a strong selection of youth-branded fintech platforms to explore, our research suggests that both millenials and Gen Z are on track to be the most financially literate generations ever.

Given that nearly half of under 40s spend their entire monthly income on living costs, it is easy to presume that wealth opportunities are scarce for young people. In 2017, Australian real estate mogul Tim Gurner went viral across international news media for saying that millenials should ‘stop buying avocado toast’ if they want to afford a house. This reference took the world by storm, also transcending into a long-standing part of meme culture. Ever since, millennials have been associated with little savings, careless spending and lavish lifestyle choices — but this could not be further from the truth.

The number of UK millennial and Gen Z millionaires has hit a record high, doubling to 2,000 in 2021 from 1,000 the previous year, shows research by Bowmore Wealth Group. The growth in high-earning millennials comes in contrast to the decrease in high-earning Baby Boomers, who have seen a five-year low in declaring an income between £150,000 – £1m.

While the assets of older generations were hard hit throughout the pandemic, 60% of Gen Z subjects reported they used the COVID-19 lockdown to become more financially confident than they were beforehand. Complemented by a keen interest in financial education, they’re also saving earlier for retirement than their predecessors and spending less money on non-necessities.

Over the past three months, several positive observations have been made of Britain’s youth that forecast an optimistic financial future. While Gen Z already have an average £1,000 in their savings, seven out of 10 millennials are regularly setting money aside, with an average of £174 put away per month. As part of Paypal’s Gen Z Financial Wellness Study, 80% of 1,000 18-25 year olds said they felt confident they’ll achieve their financial goals, with over half (55%) believing they will reach them within the next six years.

Generation X (1965-1980) households spend around £126.39 per week on ‘lifestyle products’ such as new smartphones and weekend trips – more than any other generation. On the other hand, a growing body of international research has shown that young people are far from financially excessive.

As part of  The Millenial Money Survey, which looked at the life goals of over 4,000 UK adults aged 35 or younger, 68% said they have firm plans to save more this year than last year. An additional 30% have saving strategies in place, including eating out less and cutting unnecessary spending such as takeaway coffees (or avocado toast).

‘The majority [of millennials] are far from a reckless generation. Most are sensible spenders who want to take more control over their money, despite a lack of formal financial education and income. They simply aspire to achieve what previous generations have enjoyed. Many only need to shift their money mind-set slightly to get their money working harder’ — Ross Duncton, Head of Marketing, BMO Global Asset Management

Gen Z are also taking matters into their own hands to secure their financial future and source extra income, with half of them (51%) working a second job or side hustle – rising to 61% in London –  producing an extra £248 on average each month. Scottish young adults lead in the UK for this entrepreneurial spirit (at 83%), while South East England comes out at the bottom, at 50%.

What are the top side hustles for UK Gen Z?

The digitised financial landscape is massive. Online banking is now an outdated concept next to NFTs and a diverse array of fintech apps:

Among the most popular digital finance services, fintech banking apps like Revolut, Nude and Lumio have the strongest ratio of usage across all demographics. In fact, the UK has a 71% adoption rate of FinTech companies, much higher than the global average of 64%.

Nevertheless, Gen Z and millenials are the consistently higher share of users overall throughout the digital economy. Millenials currently hold more online banking services than any other generation, while the number of Brits with digital-only accounts could go up to 23 million in the next five years.

Cash in hand is becoming a thing of the past for Gen Z, with 58% using money-transfer services and two in five getting paid via mobile apps for their side-hustle. As discussion evolves around the world about becoming a ‘cashless society’ — a term used 1,381 times by national financial and general news sources since March 1 — 51% of millenials have a positive attitude towards the idea. Moreover, they are readily preparing by educating themselves in new and innovative financial opportunities.

Of course, one of the most prolific examples of financial innovation over the last decade is cryptocurrency. While the average investor is just 28 on UK app Plum, Gen Zers are also investment buffs, with 54% holding some kind of investment already. 86% of teens are interested in investing, and those that do not say they do not feel confident or their parents do not know how to get started. Furthermore, 56% of Gen Z adults state they are including cryptocurrency or NFTs as part of their retirement strategy.

On the other hand, in a 2021 UK study with cryptocurrency firm Gemini, 57% of over 55s expressed no interest at all. The risks of loss involved may be a strong causational factor behind this, particularly due to strong international news coverage of such dangers. Since May 1, the term ‘crash’ has been used 461 times by leading online news sources in the UK, whereas positive sentiment towards the topic is scarce.

Despite their controversial interest in digital currencies, a large-scale study with Standard Life retirement scheme, 53% of Gen Zers and 51% of Millennials reported an interest in sustainable investing, compared to only 44% among Gen Xers and 36% among Baby Boomers.

While traditional banks have offered youth-focused educational schemes for some time, the short and snappy format of the ‘fin-fluencer’ (financial influencer) is driving a stronger interest for financial literacy in younger generations than any other method.

Finance trends regularly go viral, from money-saving challenges to crypto and investment. For example, Dogecoin value increased by 40% after going viral on Tiktok. There is a huge 989.3 million views attributed to the #finance hashtag on TikTok and thousands of ‘financial’ series and content posts that have Gen Z coming back for more. The Financial Diet, The Financial Burrito and Millenial Money Man are just a few of these ‘fin-fluencers’ to make a living from sharing such information with their young audiences.

Considering the UK fintech Tally has reported that Tiktok ads are over 300% more effective than Instagram, many fintech brands are spotting opportunities to specifically represent and target Gen Z and millennials. UK fintech Plum (an AI ‘assistant’ helping you save money) is reaping the benefits of early entry to TikTok, seeing strong growth in the 25-34 age group following a series of strong fin-fluencer partnerships. Plum’s debut was well-timed: COVID meant more people were on TikTok, but also led to a 180% increase in investment as people naturally thought about saving more money. 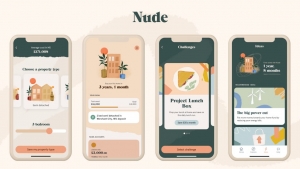 ‘Millennials are often named as the generation of no income, no job, no assets. Our data proves that for our investors at least, this stereotype is incorrect, as they have shown themselves to be savvy with their smart investment tactics during the pandemic.’ — Victor Trokoudes, CEO & co-founder of Plum

As part of a recent Barclaycard study, young people from the UK, US and Germany were asked what role their favourite brands played in their lives and what they expected from the Barclaycard brand.

It was revealed that they prize ‘good quality’ and ‘trendiness’ above all else, followed by ‘good value’, ‘good design’ and ‘nostalgia’. Good design finds the sweet spot between function and aesthetic, while also streamlined to appeal to short, eight-second attention spans. Nude is a leading example to this regard, demonstrating both ease of use, accessibility and fun visuals for all user types. Another example is Quirk, a UK-based savings app that factors in your financial personality and spending habits as a tool to budget more wisely.

While the cost of living is rapidly increasing, millennials and Gen Zers have less to lose and more passion to learn. Our research shows they have responded to inflation with an immense amount of financial maturity and are taking on the responsibilities required to prevent economic destruction in their future.

They are more financially transparent than any other generation and are finding ways to profit from sharing financial education to the masses, which can only be an incentive for further learning. They possess the strongest share of investments in both crypto and the stock market, not to mention they’re being guided on where to put their earnings through fintech, who are now building apps both functionally and aesthetically catered to their generations.

While there is no doubt that most of us are facing major setbacks throughout the financial crisis, our research suggests that this does not have to be a long-term representation of the UK economy. Despite being some of the most negatively impacted, young people are already demonstrating their resilience and confident ability to find innovative and optimistic solutions.