You are here: Home / media research / Sir Alex Ferguson’s retirement: social media reaction
Previous Back to all Next

Sir Alex Ferguson announced his retirement this morning after 26 years as manager of Manchester United.

The news followed speculation and rumour which culminated last night in a series of articles across news sites.

It was the Telegraph’s: ‘Sir Alex Ferguson must leave Manchester United completely when he decides to retire’ by Jim White that seems to have sparked the rumour mill. The article discussed the possibility of retirement and included a poll for Ferguson’s successor.

As it stands, the Telegraph poll has today’s favourite José Mourinho out in front, followed by previous favourite David Moyes and Borussia Dortmund manager Jürgen Klopp. Using Cision Social Media to create a conversation cloud, we can see that the three are also part of the social network discussion about Ferguson’s replacement. 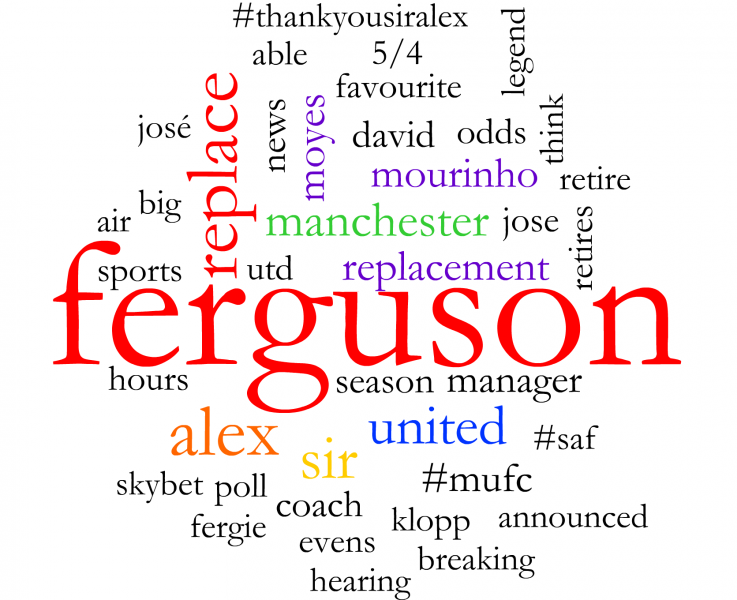 The timeline of the replacement mentions is much more revealing, with Moyes surfacing several times yesterday as the favourite and peaking ahead of Mourinho today.

These three obviously aren’t the only choices; Cision’s own Mital Patel has put David Beckham’s name into consideration and Twitter has thrown up other ex-players.

Cantona should replace Sir Alex. We need a no nonsense Manager who’s not afraid to blackout the media / FA if need be. Legend.

Whoever gets the job, they’ll have big boots to fill. Ferguson has won 38 trophies with the club including two Champion’s League titles and five FA Cups. His legendary status among his fans is clear across all social media. 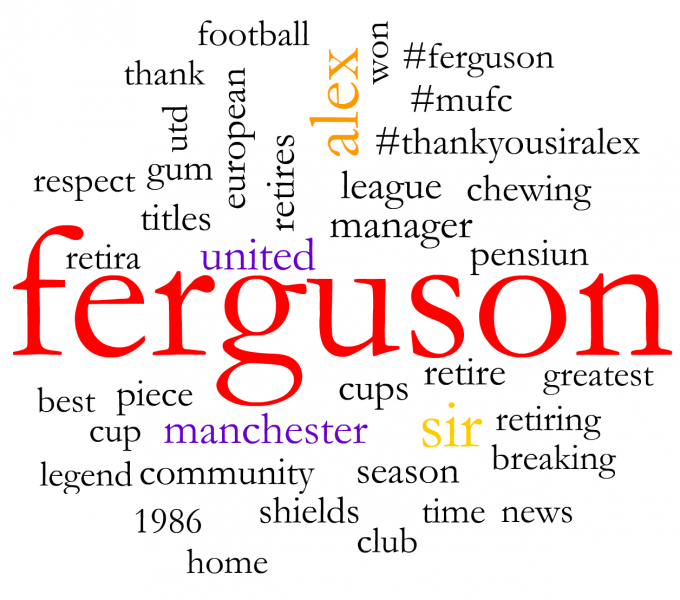 The hashtag #thankyousiralex has been trending for most of the morning, and joins ‘legend’, ‘thank’, ‘greatest’ and ‘best’ in the largely positive conversation cloud.

If you’re a fan of football, you’ll likely have an opinion on Sir Alex Ferguson, but whether you loved him or hated him, it is clear that he made a huge impact on English football as we know it today.