You are here: Home / Communications / ALS Challenge proves social media is the way forward for charity comms
Previous Back to all Next 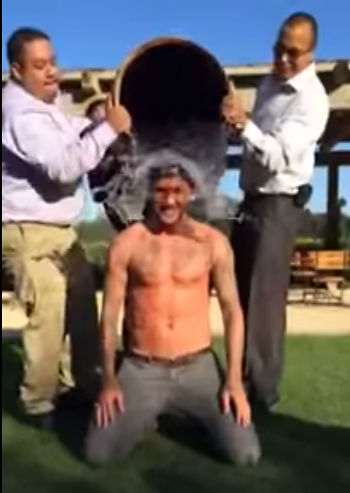 A 26-second video clip of a shirtless David Beckham dunking ice water over his head was enough to make him a trending topic on Twitter on Tuesday and the latest in the long list of celebrities to take on the ALS Ice Bucket Challenge that has taken the internet by storm, pushing donations up for The ALS Association from $1.9 million last year to $22.9 million over the same period (July 29 to August 19).

The Challenge, a social campaign rolled out last winter to raise awareness for motor neurone disease or ALS, went viral when family and friends of Pete Frates, an ex-baseball player who was diagnosed with ALS two years ago, uploaded their own videos end July.

What started out in America, has quickly spread to become a global phenomenon, flooding newsfeeds and compelling the likes of Britney Spears, Justin Timberlake, Bill Gates, Lady Gaga and Mark Zuckerberg among other A-listers to join in.

As it did for Stephen Sutton earlier this year who in the last stages of his battle with bowel cancer took to social media to raise £10,000 for the Teenage Cancer Trust. The 19-year old’s appeal garnered a global response including support from high-profile celebrities who helped take the campaign viral, raising an outstanding £3.7 million for his cause.

Another £8 million was raised for Cancer Research UK in just one week this year with the ‘no make-up selfie’ social media campaign that saw women posting make-up free pictures of themselves on social platforms and nominating others to do the same.

Because that is what social media allows us to do – share stories that matter to us, participate in a global movement from the comfort of our smartphones – which is more than any witty mainstream advertising tagline ever expected us to do. Perhaps this is why for charities, the success of social media campaigns signals a massive turn in their communications strategy.

Now international disaster relief charities too are upping their social media game. Two United Nations bodies have launched a new social media campaign called Act Now, Save Later to boost funding for disaster preparedness in developing nations, while a group of health care workers in Sierra Leone are going it alone by using networking platforms to create awareness and appeal for help in light of the Ebola virus outbreak.

According to the Social Charity Study, activity on popular social platforms has grown between 210%-480% per platform in two years. Further, the amount of ‘likes’, ‘follows’ and subscribers garnered by the top 100 charities in the Index has shot up by 193% on Twitter, 83% on Facebook, 356% on LinkedIn, 293% on YouTube and 289% on Google+ between 2012-13. ‘That is staggering, and far outweighs any increases of engagement created by conventional media,’ the report read.

Within Cision itself we have seen more charities coming on board for social media monitoring and influencer engagement services.

Nina Barough founder and CEO of Walk the Walk charity for breast cancer notes: ‘The progression of social media has completely changed the way we communicate. Years ago when we started, we would manually send out thousands of entry forms and never quite knew what kind of a response to expect. But with everything online now, you are able to track, monitor and engage with supporters real time.

‘Communications today is not one dimensional – we’re not looking at just tabloids or newspapers but across all avenues of media to get our story out and this is where a strong strategy in place helps you do that.’

An article in the Time magazine titled ‘How the ALS Challenge could change Fundraising Forever’ is clearly in agreement. ‘The Ice Bucket Challenge became a virtual, and virtually frictionless, cost-free way to raise funds. Keep in mind that many charities can spend 50% of their incomes on fundraising.’

However, as more charities embrace social media marketing, a need to regulate both the nature and outcome of campaigns will be felt.

Already JustGiving, the charity behind Stephen Sutton’s initiative has come under fire for the handling of compensation fees while a growing discontent for the ‘self-congratulatory’ nature of the ALS Ice Bucket Challenge is becoming apparent.

The Institute of Fundraising has introduced “webinars” for fundraising on social media. This is undoubtedly a start though going forward, the ‘Challenge’ in this space will be in how charities take advantage of the opportunity social media presents without compromising the sheer essence of their purpose.

ROI: a battle for the soul of social media?