You are here: Home / Influencers / Apple remains world’s most valuable brand; Lego named most powerful...
Previous Back to all Next 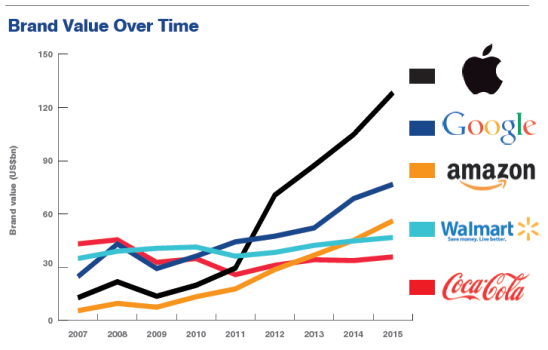 Despite industry predictions, Apple has been named the world’s most valuable brand worth $128.3bn, according to the Brand Finance Global 500 report released today.

The company has retained its top spot from last year but increased its overall brand value by 23%.

The tech giant has been credited ‘for its knack for using its brand to popularise and hence monetise existing technology, as it did so successfully first with the mp3 player, smart phone and later the tablet.’

Moreover, the success of the iPhone 6 and 6 Plus has set records for quarterly profits ($18bn) and company value ($710bn).

David Haigh, Brand Finance CEO said, ‘The Apple brand is worth US$128 billion. That value is huge not just in its own terms but also as a proportion of Apple’s record-breaking corporate valuation. It goes to show how valuable brands are as business assets and how important it is to manage them well.’

The list of the world’s most valuable brands is dominated by tech and telecoms giants. The ranks of the top five remain unchanged from last year with Samsung at number 2, followed by Google, Microsoft and Verizon.

Meanwhile, Lego has overtaken Ferrari as the world’s most powerful brand, according to a separate list within the report.

The title win comes on the back of the success of The Lego Movie which has grossed nearly US$500m since its release a year ago. ‘It has helped propel Lego from a well-loved, strong brand to the World’s most powerful,’ according to the press release.

Ferrari plummeted for the top spot in 2014 to ninth place this year. The report points out that even though Ferrari remains a strong brand, its failure to secure an F1 title in recent years coupled with the departure of long-time chairman Luca di Montezemolo, has rubbed some of the sheen of the brand.

PWC came second in the list, with Red Bull, McKinsey and Unilever making up the top five.

The report also pegged Twitter as the fastest growing brand after almost tripling its brand value in a year, from $1.5 billion in early 2014 to $4.4 billion now. Baidu and Facebook have also grown strongly, by 161% and 146% respectively. ‘The three appear to be more effectively managing the transition to mobile advertising than other tech players such as Google, boosting expectations of the financial potential of their brands,’ claims Brand Finance.