You are here: Home / Influencers / Are PRs less dependent on journalists because of social media?
Previous Back to all Next 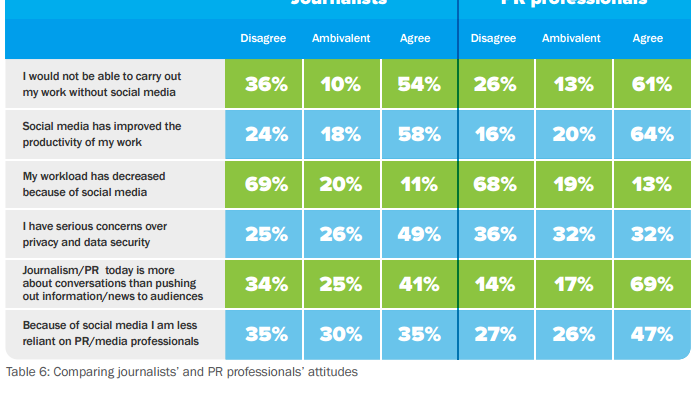 Social media has added a new dimension to the long-standing love hate relationship between hacks and flaks. Can they finally part ways amicably because of social media? Nah, far from it. But yes, flaks now certainly have an alternate medium to communicate with their audiences if they’re given the dreaded cold-shoulder.

Social media has undoubtedly made it easier for marketers to communicate directly with audiences and by doing so, it has changed the level of dependency PRs have on journalists to get their message out.

According to Cision UK’s Social PR Study 2015, which explores social media use and consumption patterns among PR professionals in the UK, the majority of PRs are happy with their relationship with media professionals yet nearly half of all respondents said that they are less reliant on journalists because of social media. A further 34% of PRs agreed outright that journalists were no longer as important to them because of social media.

This is because social media has impacted the PR profession in ways that go beyond just giving them another platform to contact or pitch journalists. According to the study, social media has added more responsibilities to the role of a PR which involves content promotion, publishing, media monitoring, community engagement and measurement. This explains why nearly two thirds of the survey respondents agreed that social media has improved their productivity. However, 68% believe that social media use has not decreased their workload, rather, added a new layer of work for them which in many ways, takes away from the tasks they so heavily depended on journalists for.

As social media usage gains momentum and takes up more room in the PR toolkit, it will be interesting to see how it shapes the PR-journalist dialogue going forward. For now, let’s just call it a love (hate) triangle, shall we?