You are here: Home / PR Pulse / Celebrating research and insight at the Think Tank Awards 2019
Previous Back to all Next 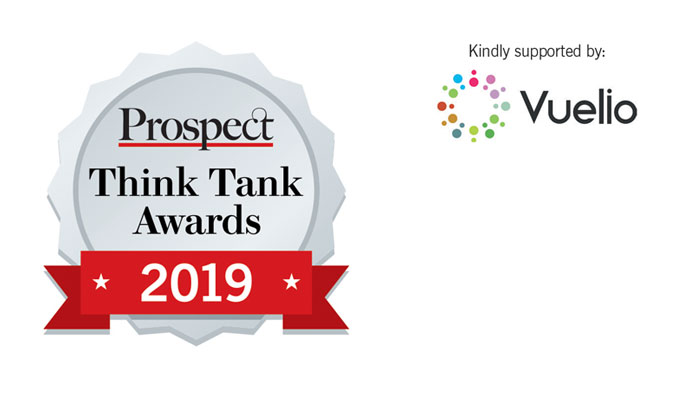 We were proud to be the headline sponsor at Prospect’s Think Tank Awards 2019 which took place within the House of Commons last night and celebrates the role think tanks play globally in providing research and insight into complex political issues.

Hosted in The Churchill Room, the awards began with a welcome from Baroness Neville-Jones, the room sponsor, who thanked all attending for their hard work over the past year. Our CEO, Joanna Arnold then spoke on the important role think tanks play in helping make sense of constant political change, from Brexit to climate change.

After an introduction from Tom Clarke, editor of Prospect magazine and host, it was onto the main event. Winners from across the world including the Peterson Institute for International Economics, last year’s winners of the One to Watch; Instituto Igarapé, Fridtjof Nansen Institute, Bruegel; the European Council on Foreign Relations and the Centre for Business and Policy Studies.

From the UK, winners included the IPPR taking the award for Science, Health, Environment and Energy; the Institute for Fiscal Studies who were award winners for Economics and Financial Affairs; The UK in a Changing Europe in the Foreign Affairs category; and the Centre for Social Justice in UK Social Policy.

The Think Tank who won the most awards on the night was the International Institute for Sustainable Development. They took away awards including the top prize for World Science, Health, Environment and Energy and Foreign Affairs as well as being the ‘Think Tank to Watch’.

The final prize was the most important, ‘Think Tank of the Year’, and went to the Institute for Government. While they had been shortlisted for four awards and narrowly missed out, they were recognised for the excellence of their output through the year.

Congratulations to all the winners and thank you to Prospect for organising the event which gives think tanks the recognition they deserve for their work to improve global politics and policy making. We are delighted to be able to support.