You are here: Home / PR / Social sharing on news sites
Previous Back to all Next

Which news site is making the best use of social media? With publicly available data, we can compare the volume of shares across different publications.

Prince George’s first official photos have been released today which is, unsurprisingly, big news for the papers. The pictures have appeared across the web with Prince George trending on Twitter in the UK. Taken by Kate Middleton’s father, Michael Middleton, the two images show the Duke and Duchess of Cambridge with the month-old Prince (the actual Prince, not the artist formerly known as).

The other news (and social media) giant, the Guardian, has only given a small space to the story on its homepage and its article has only received 99 shares. The Express features the story as its second lead after a more prominently placed article about Princess Diana. Its coverage has received just 15 shares.

The Telegraph’s article is on 104 shares, the Mirror’s has so far had 189 and the Independent has 68. 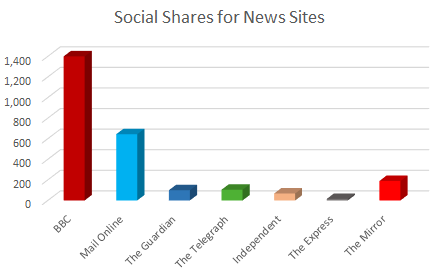 With the suggestion that social networks can account for up to 42% of website traffic, getting the social shares ahead of your competition is one of the key survival tactics for digital media. It is by no means the only method to drive traffic to a site and aid ad revenue, but in terms of coverage it is a strong indicator of value.

It is worth noting that the type of story should be targeted at the right publication. The news sites are not popular for the same reasons and the Prince George story was only one example of a generic-interest news item. If the focus switched to the David Miranda story then the Guardian would clearly come out on top, and for celebrity scandal it would be hard to beat the Mail Online. For PRs, targeting the right outlet and choosing the right media can be the difference between campaign success and a #PRFail.

All the news sites and their relevant contacts can be found on the CisionPoint Media Database.

Luke Lewis: tips on how to grow your social media communities