You are here: Home / PR Pulse / The blogosphere is evolving – what does the PR industry need to do to c...
Previous Back to all Next 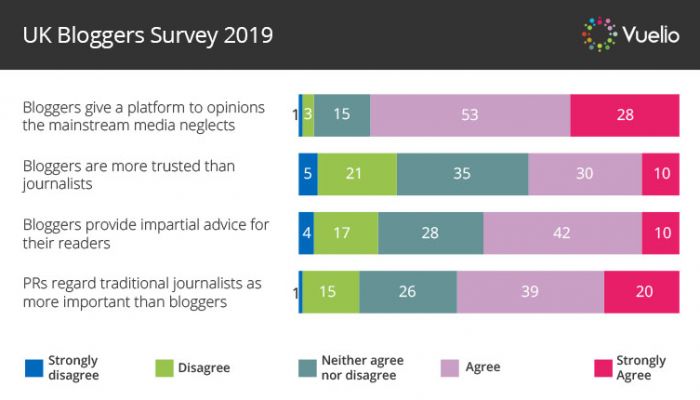 Bloggers are getting smarter about navigating the industry and finding success, according to results from the UK Bloggers Survey 2019, but could the PR industry be doing more to adapt alongside them?

According to the statistics, more bloggers are choosing to monetise their posts, with women in particular utilising blogging as a business rather than a hobby. But there’s still improvement to be made in how PRs can work with the community to measure success, to improve diversity within the UK blogging sphere, and to work on the gender split that continues in key verticals.

72% of the female bloggers surveyed blog for professional reasons rather than personal, in comparison to a 44% personal/56% professional split for male respondents
Is the fact that women are leading the way in monetising their blogs a sign of dominance in the sphere? ‘I think it’s to do with men blogging for fun outside of a day job and not seeing it as generating the kind of income they might like’, says Fiona Scott, who works with bloggers for her Wiltshire-based media consultancy. ‘Women may be more willing to accept a lower income in return for doing something they love which fits around their other responsibilities, e.g. children.’

That the results are a reflection of continuing gender inequality is a view backed up by Mindy Gofton, head of marketing strategy & innovation at i-com.net: ‘Research has shown that women’s spending money is more likely to get spent on the family as a whole, while men’s spending money is more likely to get spent on themselves. Given that women have lower average salaries and that they are far more likely to work part-time or to be full-time carers or full-time parents, it stands to reason that monetising a blog is a way to have a little additional financial freedom that their male counterparts simply don’t need.’

89% of the bloggers felt that PRs should focus on the quality of engagement to measure success
Methods of measuring success is something PRs and bloggers still disagree on, with bloggers valuing quality over the PR focus on quantity. Is this something that needs to change?

‘Measuring the success of a blogger campaign is something the PR industry needs to work on’, says Nobull’s junior account manager Amy Green, who has previously decided not to work with higher-following bloggers if they don’t fit a campaign’s specific objectives. ‘The standard “PR Value” and “Circulation” almost don’t apply anymore. Understanding what the purpose of the campaign is defines how you are going to measure the success.’

‘I think it’s important to not only focus on numbers but also on the engagement,’ says Nicole Rohde at luxury fashion brand Maxwell-Scott. ‘We are all aware that nowadays there are millions of fake accounts on social media and there is also the hidden world of buying fake Instagram followers. I often ask bloggers for case studies on previous collaborations so that I can estimate the level of engagement a post about my brand will get. It’s more important to find a blogger that absolutely fits in with the overall strategy of your brand, rather than the biggest.’

40% of bloggers consider themselves more trusted than traditional journalists (down from the 54% the year prior)
What do PRs consider better value – features in traditional media, or posts from high-profile bloggers? 40% of bloggers surveyed believe they’re more trusted than journalists, and they may be onto something. Bloggers often have more capacity to work on a piece, according to Procoal’s Tom Bourlet: ‘With the expectancy now on many journalists to burn and churn through content on a much more regular basis to match online demands, they simply don’t have the time they used to.’

Speed is something Model Village CEO William Soulier also sees as a positive: ‘The limited red-tape in terms of sign-off and internal processes enables bloggers to turn around content much faster. This ultimately gives them an edge.’ But it’s detail that Nicole appreciates in the fashion sphere: ‘Bloggers will usually provide outfit suggestion to go along with your product. They show how the item can be used in everyday situations, which provides the target audience with a better idea.’

Whether bloggers are a more reliable choice that traditional journalists is something head of outreach and content Simona Bojare considers in her work at Ascent Group: ‘I still work with A LOT of bloggers but I’ve become a lot more selective than I was few years ago. As an industry, we’re definitely seeing people/readers be a lot more sceptical when it comes to influencer/blogger endorsements. This is due to those few that have had lousy disclosure practices in the past.’

Danny Whatmough, managing director, Integrated Media at Weber Shandwick believes both traditional journalists and bloggers need to be judged on their individual work and merits: ‘Trust and authenticity are topics that are sensitive but important in both disciplines. There are examples on both sides where practitioners have not been trustworthy or authentic and this has an impact on the whole industry.’

None of the female bloggers who took part in the survey write about politics, gaming, music, or tech. Of those that took part in this survey, 93% identified as White British
Results from The UK Bloggers Survey 2019 mirrored a continuing gender disparity across certain subjects in the wider blogging community, as well as the shockingly low percentage of high-profile BAME bloggers and influencers in the UK. Whether the existing, predominantly white, blogging community isn’t an inviting space for BAME creators to join, or PR companies and brands aren’t doing enough to work with those who are already a part of it, there’s no disputing that there are many voices out there, and more needs to be done to find and elevate them.

‘For PRs to make a strong difference, they need to stop following and repeating what their competitors are doing and to look elsewhere, see the people who are trying to get their name out there and just need the opportunity to be heard’, believes Tom Bourlet. ‘They need to analyse their previous marketing efforts or influencers worked with and see if they have followed a consistent pattern and see whether there is an opportunity to change this and to build in more diversity.’

‘Lack of diversity is a problem that the PR industry faces too’, says Danny at Weber Shandwick. ‘It’s important that we work hard – including through surveys like this – to hear from a diverse range of opinions and properly reflect the audiences that we are looking to reach. Whether that’s through PR outreach, data and insight or news articles, we all have a responsibility to support diversity that will, ultimately, make the output and results of campaigns stronger.’

Work in PR and want to work with the best bloggers in the business? You need the Vuelio Media Database.