You are here: Home / journalism / The Guardian Launches US Non-Profit
Previous Back to all Next 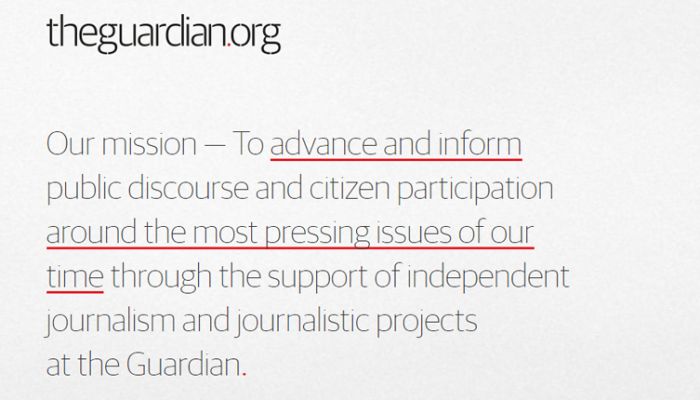 The Guardian has launched a US-based non-profit organisation in an attempt to support quality independent journalism.

Its website, theguardian.org states that its mission is to advance and inform public discourse and citizen participation around the most pressing issues of our time through the support of independent journalism and journalistic projects at the Guardian.

The new organisation will raise funds from individuals and foundations and direct them towards projects that advance public discourse and citizen participation around issues such as climate change, human rights, global development and inequality.

The Guardian Media Group states that the non-profit has already raised more than $1 million in grants, including:

The Guardian has a long history of partnering with ‘like-minded philanthropic organizations’ and already counts the Bill & Melinda Gates Foundation, the Ford Foundation and Rockefeller Foundation as longstanding philanthropic partners.

The project is headed up by Rachel White who is also the Guardian’s global EVP of philanthropic and strategic partnerships.

Commenting on the launch of the new organisation, White said: ‘The connection between powerful story-telling and social cause has never been more vital. Across the past six years, philanthropy has played an increasingly significant role in supporting Guardian journalism on issues that critically inform the public–climate change, inequality, women’s rights, and more. The creation of theguardian.org makes it possible for us to forge key strategic partnerships, and engage a wider range of individuals and philanthropic organizations in supporting our global ground-breaking storytelling and reporting.’

As news companies continue to look into new ways to fund investigative journalism, we can expect to see a number of publishers adopting philanthropic models and this is certainly a smart move by the Guardian, helping them fund expensive journalistic projects.