You are here: Home / journalism / The Mail Online – Coming to a TV Screen Near You
Previous Back to all Next 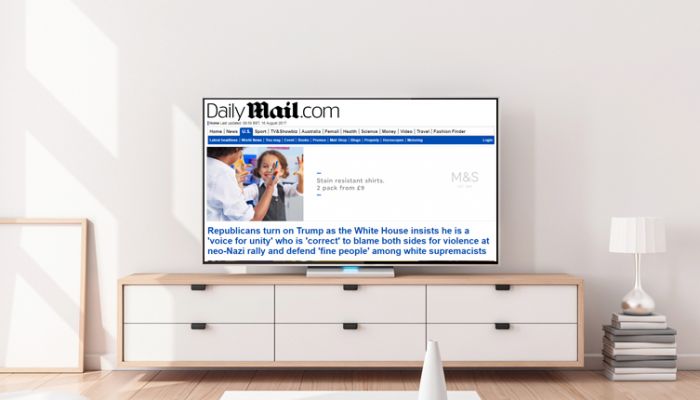 The Mail Online is set to expand on its success in the US market, where it has already achieved the status of the most popular English-language news site, with the launch of a new hour-long television show which will be syndicated across the nation via a number of terrestrial TV channels.

According to a report on the Mail Online, DailyMailTV will launch Monday, 18 September and has been cleared by Sinclair Broadcast Group, Tribune Broadcasting, Gray Television, Inc., Cox Television and Nexstar Media Group to run in 96% of the United States.

It is also believed that the show will be available for sale to international broadcasters.

The Mail Online has secured the services of former American Football star, Jess Palmer, to host the show which will be filmed in New York. Palmer has previously worked as a football analyst for ESPN and for ABC News where he was a contributor to Good Morning America.

Speaking to journalists about the show, Palmer said: ‘I’m honored to be joining DailyMailTV. I’ve always been a huge fan of DailyMail.com, so to bring the world’s most read English language newspaper website to television for the first time is an opportunity I couldn’t refuse.

‘I love telling stories that engage and excite Americans and to be able to do this five days a week on DailyMailTV is a dream come true.’

In a press release announcing the launch of the show, a spokesperson for the Mail Online said: ‘From exclusive stories to breaking news, showbiz, politics, crime, health and science and technology, DailyMailTV will be must-watch television.

‘Sharing captivating stories from across the United States and around the globe, viewers will become addicted to DailyMailTV, just as they have to DailyMail.com.’

The Mail Online currently employs 260 staff in the United States and claims to publish some 1,600 articles every day.