You are here: Home / media research / The week on the web
Previous Back to all Next

In a week that has been dominated by sport, we look at the top stories being discussed online and see which one has come out on top.

Using Cision Social Media, we can see how much each of the top stories has been discussed: 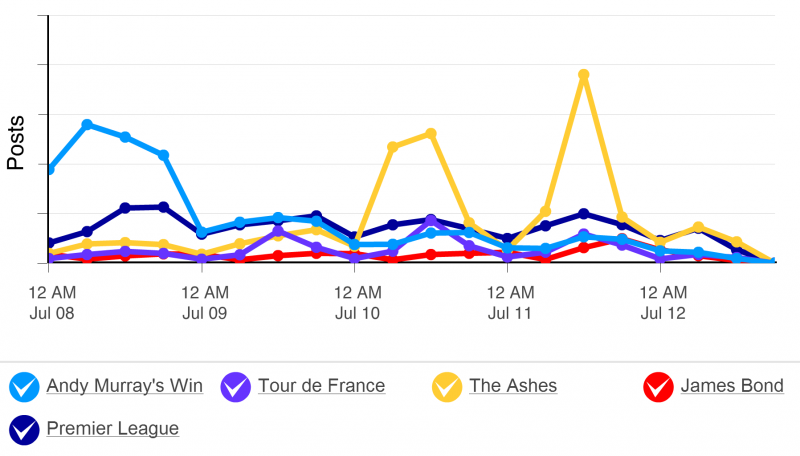 Unsurprisingly, it is The Ashes which have dominated the conversation. Now in its third day, the England vs. Australia test series is one of the biggest events in the cricketing calendar. The discussion continues in the blogosphere:

The Cricket Betting Blog is covering The Ashes with a daily diary of events and how that changes the gambling odds. It is also writing from a more general interest point of view that can be seen in the ‘Who is Ashton Agar?’post.

The Thoughts from the Dustbin blog produces fake diaries from a ‘fictional’ 13th player: Andrew Nother Mitchell. The blog is written by an Australian living in England and makes an entertaining read.

For England fans, The Full Toss bills itself as the unofficial England Cricket Team blog. Breaking down the ashes the blog is covering the trials and tribulations that the England team is facing, particularly that man Ashton Agar.

Andy Murray’s win was widely discussed on Monday morning as everyone filed into their offices to discuss the ‘Great British’ achievement. The story carried traction as David Cameron forgot Virginia Wade in the PMQs, which was then associated with William Hague seemingly mouthing ‘stupid woman’ at Labour’s Cathy Jamieson.

Beyond the standard reportage, Business Computing World (BCW) explains ‘How Technology Can Ensure Sports Clubs Stay Ahead Of The Game’, using the recent successes of Murray and the British Lions as a connection.

The Tour de France is ongoing, with the big news being Britain’s Chris Froome currently in the lead. If he should win the whole Tour, it will be only the second time for a Britain to win it following Bradley Wiggins’ triumph last year. The event has a loyal fan following and the blogosphere is expectedly full of Tour de France talk.

For something slightly different, Cycling Info has listed the ups and downs for different competitors in its ‘Disappointment in the Tour de France’; and Wiggle has asked 15-year-old Luke Allingham to gives his view in, ‘A youngesters view of the 100th Tour de France – Luke Allingham’.

James Bond news this week had Sam Mendes reversing his previous decision not to return to the franchise. It has been confirmed that Mendes will direct Bond 24 starring Daniel Craig, to be released in 2015.

The People’s Movies published the ‘Sam Mendes returns to direct Bond 24’ press release in full and noted that the film will be released alongside other sequels including: ‘Terminator 5, Avengers 2, Finding Dory, Ant-Man, The Hunger Games: Mockingjay Part 2 and Star Wars Episode VII’.

And finally, to the Premier League fans. The new season is fast approaching and with the transfer window open excitement is building up. The biggest stories from the week are Luis Suarez’s agent saying he wants to leave Liverpool, and Wayne Rooney out for a month with a hamstring injury. From the web:

Football.co.uk claims Arsenal is set to increase its bid for Suarez to £40m, after having a £30m bid rejected.

What do you think of the biggest stories of the week? Was there anything that happened that we should have included? Let us know in the comments below.

The graphs and social media information made with Cision Social Media via CisionPoint. All the blogs and their authors are in the CisionPoint Media Database.

Going against the flow: Experiences of a PR-turned-Journalist