You are here: Home / social media marketing / We Are Social acquired by China’s BlueFocus in £18.7m deal
Previous Back to all Next 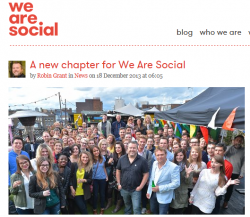 We Are Social, the specialist digital marketing and communications agency has announced that BlueFocus Communications Group, China’s largest marketing services company has acquired 82.8% stake in the business. The deal is estimated to draw an initial sum of £18.7 million for the agency, with further performance-based consideration over a three year period.

The move, part of BlueFocus’ global expansion plans comes at a time when We Are Social has reportedly been on a search for external funding to support future growth.

The deal will enable the companies to leverage localised brand presence and expertise through the partnership as they enter new markets.

Founded by Robin Grant and Nathan McDonald in 2008, We Are Social will now become BlueFocus’ primary digital agency brand outside China. However, the agency will remain an independent brand, led by its existing management team around the world.

‘A big part of the reason we chose BlueFocus as our partner was the freedom we’ll have to continue being We Are Social,’ confirmed Robin.

We Are Social employs 300 staffers across eight worldwide offices in Europe, Asia, Latin America and the US.

The acquisition is subject to Chinese regulatory approval, which is expected to be received within three months.