You are here: Home / PR Pulse / Another great year for Interel at the PRCA Public Affairs Awards
Previous Back to all Next 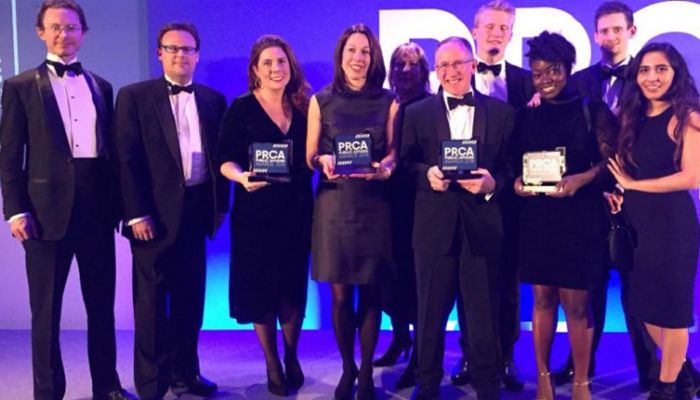 For the second year running, Interel was the big winners at the PRCA Public Affairs Awards, picking up four prizes including Consultant of the Year for Katherine Morgan, and the Outstanding Contribution award for George McGregor.

Now in its fifth year, the PRCA Public Affairs Awards took place last week to celebrate the best of the best in public affairs in 2018.

In-house Professional of the Year was awarded to Lis Wallace of Malaria No More UK, who took to Twitter to say she was ‘Beyond thrilled and a little stunned’ to have won.

Other winners included Cicero, named Consultancy of the Year; Battersea Dogs & Cats Home, which took home In-House Team of the Year; and National Farmers Union (NFU) for Trade Body Campaign of the Year and Party Conference Stand of the Year. Judges said the NFU ‘Back British Farming’ campaign was ‘a campaign impossible to miss’.

This year the Douglas Smith Prize was awarded to Christine McKenna, account manager at Grayling. Christine said: ‘I am thrilled to have received the Douglas Smith award for Young Public Affairs Professional of the Year. A tough process and a real honour.’

Francis Ingham, director general, PRCA, said: ‘The quality and standard of every entry into the awards this year continues to exceed expectations, each entry a glowing a testament to the resilience, growth, and forte of the UK’s public affairs and lobbying industry. Huge congratulations to all those who are taking home an award tonight, I look forward to seeing all of you again next year.’

Corporate Campaign of the Year: Siemens

Consultancy Campaign of the Year: Interel

Consultancy of the Year: Cicero