You are here: Home / Politics / Budget 2021 Speculation: How might Rishi Sunak deliver a green recover...
Previous Back to all Next 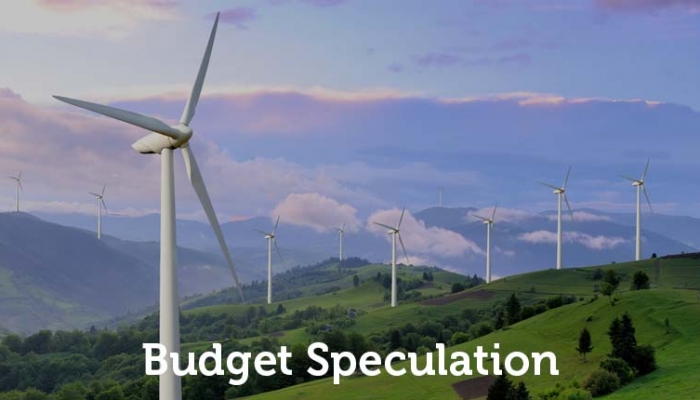 Much has changed since Chancellor Rishi Sunak delivered his last Budget almost a year ago, but one thing which hasn’t is the need to tackle climate change and to protect the environment, both in the UK and internationally.

When the Treasury announced that 2021’s Budget would be on 3 March, it said that it would ‘set out the next phase of the plan to tackle the virus and protect jobs’. As the widespread calls, both from within the Government and from a wide variety of interested parties, to ‘build back better’ and deliver a ‘green recovery’ show, these two aims can be delivered in parallel.

So far, the Government has released some of the building blocks to inform and help deliver these aims. We’ve had the Ten Point Plan for a Green Industrial Revolution, the National Infrastructure Strategy, the Energy White Paper, the interim report of the Treasury’s Net Zero Review and the Dasguta Review on the Economics of Biodiversity. More strategies are promised, digging into some of the toughest areas of decarbonisation: heating, transport, energy-intensive industries. With the UK hosting COP26, the UN’s climate change conference, this year, the Government will want to show that it is leading by example.

But to deliver on these strategies, the Chancellor will need to pull some of the levers at his disposal. To look at it in the most simplistic way, the Government has two ways of doing this: spending and tax. Sunak could announce investment in technologies and projects to deliver a ‘green recovery’ or changes in taxes to incentivise others to do so, such as new reliefs. Equally, he could announce increases or adjustments to taxes to penalise those responsible for emissions and environmental damage, embracing the ‘polluter pays’ principle.

One tax which could rise is fuel duty. The Daily Telegraph recently reported that Conservative backbenchers believed that an increase is ‘inevitable’. A ‘Northern Tory’ told the paper that ‘the Government can wrap itself up in the green cloak of COP26 and the British public might not love it, but they will stomach it’. However, ending the decade-long freeze would not be without political problems. The Sun, which strongly backed the freeze, has already mobilised against the change, enlisting backbenchers Robert Halfon, who said ‘a fuel duty increase would level down – far from building back better and would damage the foundations of economic recovery’, and Craig Mackinlay, who claimed it would be ‘bad for the economy, bad for business and bad for jobs’.

The Times has reported that the Government has been considering options for new carbon taxes, with departments ordered to set ‘prices’ for emissions from all parts of the economy as part of a plan to ‘implement some form of carbon pricing’ in the next decade. This would form part of a strategy to ‘deliver a carbon price for the whole economy’ ahead of COP26. However, this plan has been blocked by Boris Johnson according to the Daily Mail.

BDO suggests that further changes to taxes linked to climate and the environment could be announced, such as capital allowances ‘that support the Government’s carbon reduction agenda’, new taxes on more single-use items such as coffee cups, or higher VAT rates for ‘environmentally damaging goods and services’.

If the Government is minded to go down this route, it would do well to examine the findings of a recent National Audit Office report that concluded the Treasury and HMRC ‘tend to focus more on the revenue that environmental taxes raise rather than the environmental impact they achieve’ and ‘do little’ to identify measures ‘which impact on Government’s wider environmental objectives but which are not recognised as environmental in nature’. If the Government wants to use the tax system to incentivise environmentally beneficial behaviour and penalise irresponsible activity, it needs to be sure that it’s doing so in an effective way.

Of course, another way in which the Government can act is for Rishi Sunak to produce the national chequebook. As the Institute for Fiscal Studies notes, ‘we need a plan for measures that increase the productive capacity of the economy and help steer and ease the transition to a new normal’ which should include ‘investments in physical and digital infrastructure, training, and science’ to help ‘achieve goals such as reaching Net Zero by 2050’.

The use of Government investment to deliver this green recovery is being advocated by business and unions. The TUC is continuing to push its plan to create 1.24m jobs in green infrastructure by bringing forward at least £85bn of infrastructure investment. This would see investment across a range of industries, including energy, land, buildings, transport, waste, manufacturing and digital, delivering a range of positive outcomes both for the environment and the economy.

The CBI has recommended that the Government commit to deliver seven more gigafactories by 2040 (these build batteries for electric vehicles), ensure that private sector investment is crowded-in by the new National Infrastructure Bank and invest in sustainable aviation fuels, as well as introduce reliefs for businesses which invest in property and machinery energy efficiency.

One area to particularly watch out for will be the future of the Green Homes Grants. Launched with much fanfare by Sunak as part of his Plan for Jobs last summer, recent news has not been encouraging. The grants were advertised as being worth £2bn, allowing homeowners and landlords to apply for vouchers for energy efficiency improvements. However, 95% of the £1.5bn for householders has not been spent and, while the grants have been extended until March 2022, the funding is not being rolled over to the next financial year. Instead, £320m will be available from March – a much smaller sum.

Shadow Business, Energy and Industrial Strategy Ed Miliband said that the Government was ‘denying homeowners the energy improvements they need, denying installers the work they need and denying the country the green transition we need.’ The Government blamed the low take-up on ‘an understandable reluctance on the part of the public to welcome tradespeople into their homes.’ If Sunak does want to revisit the design or funding of the scheme, the Budget would be a good opportunity.

With so much happening in the environmental and climate policy landscape in 2021 – including another budget, the UK’s Sixth Carbon Budget – it would be a missed opportunity if the Chancellor didn’t take the Budget as an opportunity to ensure that the Government’s tax and spending decisions were in line with its ambitious climate ambitions.