You are here: Home / PR Pulse / CIPR income rises to £4.3m
Previous Back to all Next 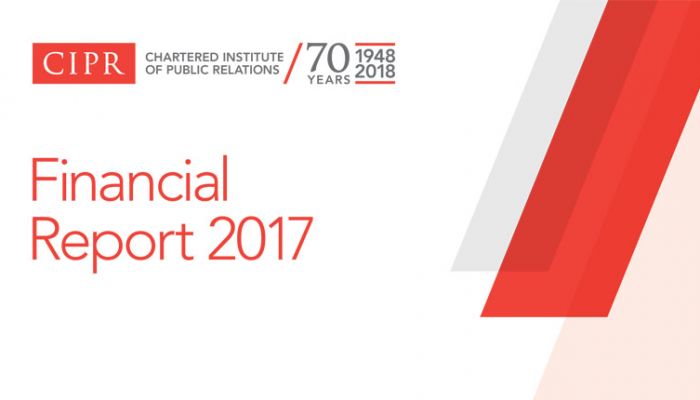 The CIPR has announced a profit of £4.3m in its financial report, leading to the Institute’s biggest surplus in five years. The report shows that thanks to financial activity across 2017, reserves grew from £417,000 to £613,000.

The Institute cut costs from last year, which, coupled with strong gains across its Membership, Training and Qualification, led to a £230K rise in income. This is despite slight falls in income across its Awards, publishing, governance and groups.

Jason MacKenzie, vice president at the CIPR, said: ‘2017 was a landmark year for the Institute, across both quantitative and qualitative measures. 1,800 new members joined, member retention was higher than in recent years, our turnover was higher than for many years, our costs were down year-on-year, and we produced the largest surplus since 2013.

‘The drive to professionalism continued apace, with more members than ever before committing to continuing professional development, and numbers of Accredited and Chartered Practitioners growing strongly.’

The report also details a gender pay breakdown at the organisation, despite this not being a legal requirement (due to its size). The Institute is 57% female and 43% male but men are more likely to earn more money. Of the 13 men at the company, four earned more than £50K, opposed to the one female member of staff in the same bracket. Women also make up the majority of the lowest bracket: five women earn £15K-£25K opposed to two men.

The board and council are all volunteers so gender representation across the Institute is not completely linked to pay; both the current President and President-elect are female, and the board is majority female. The CIPR has made huge steps this year to improve the diversity of its board and the Institute is committed to reducing the gender pay gap in the PR industry, a pledge that is included in the CIPR Manifesto.

CIPR members have the opportunity to discuss the financial report at the Institute’s AGM in Newcastle on 12 July. The AGM is free to attend and features a talk from the former chair of the Social Mobility Commission, Alan Milburn. Find out more here.