You are here: Home / Politics / Covid-19: Weekly Economy Summary – 21 January
Previous Back to all Next 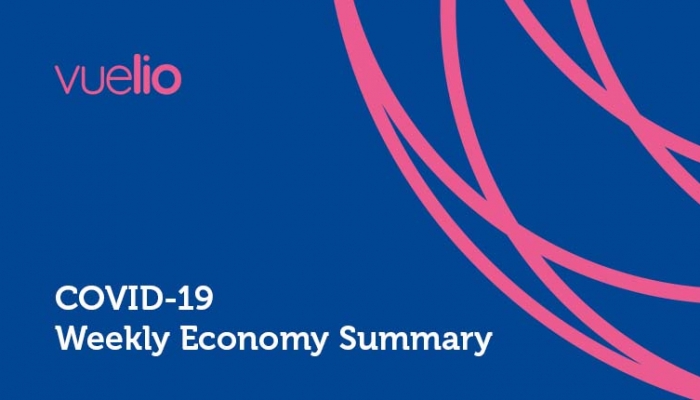 The Economy Summary is part of our Weekly COVID-19 Bulletin, sent every Thursday. You can sign up to receive your copy here.

Recent ONS data showed that the UK economy shrank by 2.6% in November as lockdown restrictions reduced economic activity. The decline followed a six-month growth spell, undoing some of the recovery in the economy. It means GDP is 8.5% below its pre-Covid-19 level from February 2020.

The economy is generally doing better than the OBR expected back in November – largely due to data revisions but also because of a smaller lockdown effect in November. However, with even tighter restrictions coming into force at the start of 2021, a ‘double dip’ recession looks inevitable.

The National Institute of Economic and Social Research argued that temporary and permanent adjustments post Brexit transition period are likely to also weigh on growth in the early part of the year, but the vaccine roll-out provides some encouragement for consumption and investment in the second half of 2021 and beyond.

Treasury minister Jesse Norman MP has suggested that tax rises may not be necessary if the economy bounces back strongly following an effective roll-out of the coronavirus vaccination programme. Speaking to the Treasury Select Committee, Norman said the economy could be sufficiently boosted by households and businesses unleashing pent up demand once restrictions are lifted.

The British Chambers of Commerce called for the Chancellor to provide urgent support for businesses across the UK that are facing a bleak future from the ‘debilitating squeeze’ of coronavirus restrictions. The BCC said that businesses cannot afford to wait until the Chancellor’s March budget, and proposes immediate measures to support cash flow including expanding business rates relief, prolonging VAT deferrals and offering an immediate, further round of upfront cash grant support, as well as maintaining the Job Retention Scheme at least until the end of July 2021.

Similarly, ahead of the Budget, the CBI also proposed extending the Job Retention Scheme to the end of June, lengthening repayment periods for existing VAT deferrals until June 2021 at the earliest, and extending the business rates holiday for at least another three months. It also calls for business rates reform to be ‘top of the list’ of action to be taken at the Budget.

Labour’s Shadow Chancellor Anneliese Dodds has stepped up her calls on counterpart Rishi Sunak to amend the Coronavirus Job Retention Scheme to give working parents the legal right to request paid flexible furlough. Currently, parents can ask to be furloughed for childcare reasons, but employers can reject the request. Labour said it wants the current request system to be turned into a legal and enforceable right to apply – with an expectation that employers would grant furlough, except in exceptional circumstances.

The Resolution Foundation joined opposition parties, anti-poverty campaigners and many Conservative MPs in urging the Government to extend the £20-a-week uplift in Universal Credit introduced during the first wave of the pandemic. They warned that not extending it would contribute towards the number of children in poverty increasing by 730,000 and would mean Boris Johnson would not be able to claim to be ‘levelling up’ the UK.

With one in three children projected to be living in relative poverty by the end of this Parliament, Children’s Commissioner for England Anne Longfield also called on the Government to extend the £20 Universal Credit uplift in the short term, but said it’s a sticking plaster ‘made as a result of short-term political embarrassment’, and argued for an overhaul of the current system.

Conservative backbenchers representing 65 Northern seats, many of them ex-Labour ‘red wall’ constituencies, have joined calls for the Prime Minister to cancel a planned reduction in the benefit. Labour has called an opposition day debate on the issue in the House of Commons last Monday, but Johnson has ordered his own MPs to boycott the vote rather than risk a significant rebellion. A non-binding Labour motion calling for the universal credit top-up to be kept in place beyond 31 March passed by 278 votes to none after the  Commons debate. Six Tory MPs defied party orders to abstain and voted with Labour, adding to the pressure on the PM on the issue. The motion, which will not automatically lead to a change in policy, was put forward by Labour as a way to put additional pressure on the Government to continue the increase.