You are here: Home / PR Pulse / How can brands navigate China’s live streaming market?
Previous Back to all Next 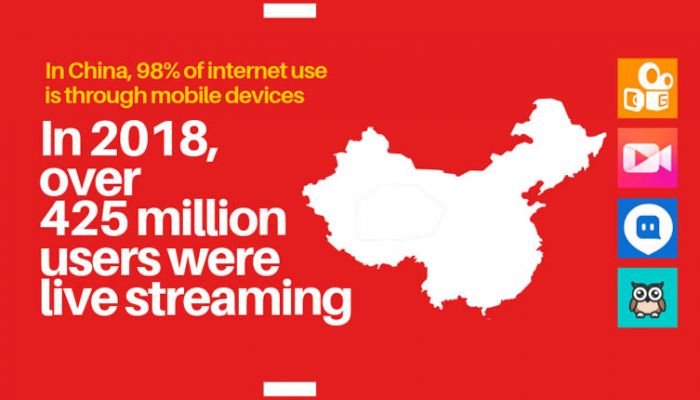 This is a guest post and infographic [below] by Balvinder Kataora, marketing executive at Comms8.

An astounding 98% of people in China experience the internet through their mobile phone, which instantly makes over 800 million users a formidable cohort for marketers to tap into. When combined with the steady growth of the Chinese middle-class, it is clear to see business opportunities in what is now the world’s biggest retail market.

While the market is ripe for marketers, a unique set of technological and cultural factors has led the internet to develop differently from the UK. Having a large population, being awash with cash from a booming economy, and excellent mobile coverage roll out means the mobile app ecosystem is leaning towards innovative uses and high-bandwidth applications. Demand for long-distance communications, entertainment and hassle-free payments has propelled instant messaging, fintech apps and live streaming platforms to become a mainstay of the internet east of the Himalayas.

Live streaming has noticeably become a cultural mass phenomenon that is arguably the most popular form of online entertainment. Sitting between the crossroads of a modern-day QVC and communal socialising, platforms such as Kuaishou, Douyu, Meipai, Inke, and Momo are offering wide-spectrum appeal in any niche with seamless shopping and gifting options for fans.

The context for these live shows is often thematic and involves a presenter documenting their life and thoughts to an audience from tens of people to even millions. While intimate, some often weave product reviews and demonstrations during their shows to drive click-throughs to their own mini shops online, generating sales. Others, however, opt for the endorsement route whereby large brands, often luxury or fashion orientated, provide free samples in exchange for ‘air-time’ on their regular shows.

An increasing number of live streamers have pursued a more controversial option of gifting. Viewers buy virtual gifts with real money to effectively ‘tip’ live streamers. During these shows you will often see animated diamond icons, emoticons and sometimes richly animated flying jets and rockets shooting into space for the big spenders to show their ‘boss status’.

This business model has received criticism, as younger viewers may feel pressurised to financially support their online idols, or that the process of patronage does not manifest a physical item. The ephemeral nature of the performance makes it difficult to accurately price the value of gifts; is your favourite online star worth $2 or $200 per stream? A hard question to answer, but the value is sure to increase if the audience enjoys the stream.

Despite being relatively new, compared to more established digital trends, Deloitte has estimated the value of the live streaming market to be $4.4 billion in 2018, an 86% increase from 2016.

The attraction for the format, just as with social media, is the convenience it offers to meet like-minded people and share common interests in real time – and for free. For a nation that has witnessed radical demographic change over the last 50 years, much is out of balance. The preference for parents to have boys, has meant that the gender ratio has widened to the degree that there are almost 35 million more men than women, which is more than the population of Malaysia.

The gender disparity in the country is also reflected in the viewing audiences too. In 2016, IResearch found that approximately 63% of viewers were male with 35.5% being female. These platforms are in some cases allowing the socially isolated to instantly be adored with attention and praise from their most preferred online star, who happens to be from the opposite sex.

The biggest hurdle for brands is how to enter methodically into a fast-moving market without succumbing to social or legal faux-pas. The line between advertiser, endorser, advocate and consumer is increasingly blurred. So much so, there are concerns to whether viewers will be sure they are being marketed to, as per requirements of legalisation for online endorsements and sponsorships.

Given the rise of live streaming in China what can international brands learn from the market in the East?

New forms of sales relationships
It is almost unheard of to use pay-per-click (PPC) marketing or pay-per-sale (PPS) as arrangements are almost always a flat rate fee. That said, platforms like Bangtuike are trying to make all live streamers and online influencers advertisers, no matter how small their audience is. The desire to work with micro content providers is seeing greater demand as brands are able to capitalise on a wider audience market.

Being mindful of corporate social responsibility
Unlike TV and Radio, regulatory bodies are still catching up to the technology and so there is a legal blind spot in the way brands are able to use the platform. Brands need to step back from their campaign from time to time and assess how the overall impact might be interpreted, rightly or wrongly.

One way to do this is to use influencers who are not only based in the large metropolises. Knowing that the next 20 cities after Beijing, Shanghai, and Hong Kong still hold a huge retail population, and moving away from a well-beaten path, could reap huge rewards.

In essence, developing a Chinese voice for the brand is key to gaining market share and have your brand, in a way, speak Chinese.