You are here: Home / PR Pulse / Is Lush building its own social network?
Previous Back to all Next 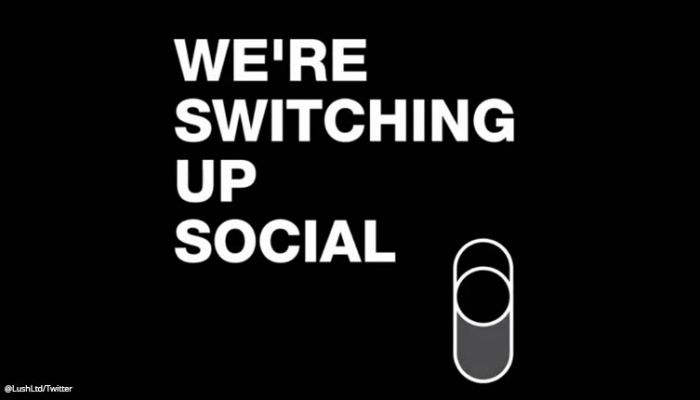 Lush hit the headlines last week when it announced the closure of its main UK social media accounts. The announcement claimed social media is ‘making it harder and harder for us to talk to each other directly’, the company is ‘tired of fighting with algorithms’ and Lush doesn’t want to ‘pay to appear in your newsfeed’.

Its plan is to highlight more voices, and some have read this as more influencer marketing, but that still requires a reliance on existing social media channels whether the company is using them directly or not. On the announcement to quit social media, Lush encouraged people to engage directly via live website chat, email or phone.

Within 24 hours, most major news sites, both mainstream and trade, had picked up the story in what’s undeniably a publicity win for a company that doesn’t spend money on traditional advertising. Unfortunately many of the stories focused on how confused Lush customers were by the news – like this story from the Mirror – with many suggesting that Lush’s target audience are unlikely to call, chat or email the company.

While there is likely to be a bigger plan to come (more on that in a moment), this is half an announcement. Without explaining the ‘What’s next’ part of ‘we’re quitting social media’, many have been left in the dark. To some, this tease may be exciting and the intrigued superfans will be on tenterhooks. But in the age of social media, where attention spans are measured in seconds, this tactic is also likely to lose members of its audience who lack the patience for a protracted stunt.

Not everyone is against the move though, Lush has a fan in David Parkinson, managing director of Brave & Heart who, writing for The Drum claims to have considered this type of move for many of his clients. He says: ‘For several global clients, my agency has looked at similar strategies […] we have started to think beyond the platform and back to the purpose and the people. Asking “who?”, “why?” and “where?”, not just “what?” and “when?”.

‘This is why a brand the size of Lush gets my thumbs up; its big enough for people to take notice, small enough to have the chops to do it.’

Signs of a new network
On the surface it may seem like a baffling move for a company such as Lush, for whom social media engagement seems to come easily for both its products and ethical campaigns. And it’s that level of content engagement that Lush won’t want to lose, which is why the final line of the announcement points at more to come: ‘This isn’t the end, it’s just the start of something new. #LushCommunity – see you there.’

The accompanying image says Lush is ‘switching up social’ – not abandoning it. Clarity can perhaps be found in the company’s annual report, which was published the week before this announcement. The report highlights a growth in online sales and the claim that it is ‘optimistic that our new global website launch will help generate further growth’.

The company is investing heavily in its ‘digital estate’, which is being created to ensure a ‘safe haven for our Lush communities online’. It is continuing to focus on ‘developing features in beta, an evolving brand led commerce experience online’. Beta.lush.com, or #LUSHLABS, is already open to UK customers with plans for it to roll out globally by the end of June.

At the moment the site is ‘by invitation only’ and encourages registered users to ‘invite collaborators’. Users – who have to create an account – will ‘hear it here first’ with ‘early-bird content reveals and news’.

The homepage finishes with the line ‘Want to know a secret? By joining you’re helping us build a new Lush platform. Lush has always been a community-led company. Lush Labs is the next step in putting your feedback at the front and centre’.

An online community with free-flowing engagement for registered users? Sounds like a social network to me.

What do you think of Lush’s move? Tempted to quit the Gram or leave Facebook? We’re still on social media so let us know your thoughts on Twitter @Vuelio.