You are here: Home / Q&A / #JingleBlogs: Crave
Previous Back to all Next 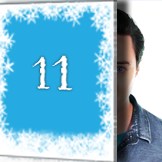 As for all the advent bloggers, we asked Luke two very special seasonal questions:

What’s your new year’s resolution?
It’s a cliché, but I’d like to get in better shape. The world of tech journalism isn’t known for its muscle-building qualities, so I’ll be trying to hit the gym to compensate for all that trade-show junk food.

Luke has previously taken part in a Journalist Spotlight discussing how his relationship has developed with PRs throughout his blogging career. Luke also revealed that he’s really interested in dinosaurs and has been compared to Daniel Radcliffe…

Congratulate Luke on his inclusion in the 2013 Advent Calendar on Twitter @lukewestaway, and check out his advent calendar entry here.