You are here: Home / Q&A / Journalist Spotlight: Andy Jarosz
Previous Back to all Next 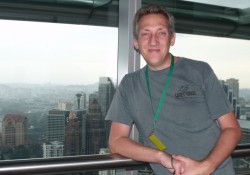 Andy Jarosz is a freelance travel writer who talks to Cision about taking days off, poking a volcano and looking like Nicolas Cage.

Describe your current role
As a freelance writer my work is probably 60% travel and the rest is copywriting. For the main outlets I write for, it’s a mix of pitching ideas from places that I’ve been or I’m planning to go to and getting commissioned work where the editor says, ‘Can you write this article by Friday?’ or in some cases, ‘by this afternoon’. My pitch success rate is probably more than 50%. At the start it was very low; so much of it is down to the editors knowing who you are and now I am mainly pitching to people I’ve worked with before.

How did your blog 501 Places start?
When I started as a freelancer I had no particular intention to write a blog but after writing pitches day after day I thought I needed some writing discipline. It grew from the intention of writing 500 words everyday on something, which I can read, edit and get out there. Having the blog noticed by various people was a useful tool for pitching; it got me noticed by the BBC so that in itself is a successful outcome.

How often do you travel?
As a travel freelance I’m away 13 to 15 weeks a year. My wife and I have just come back from a seven-week trip and that’s the big trip of the year. There’ll probably be a two-week trip somewhere and a whole series of short breaks.

How did the long trip relate to your freelancing?
We wanted to take a long trip in the winter so we bought a round-the-world ticket visiting the destinations of our choice. I then pitched a series of ideas to various sites – BBC Travel, National Geographic Traveller and roundtheworldflights.com, which is the company I bought the tickets from. By the time we left I had 27 commissioned pieces, 21 of which I wrote while we were travelling and the rest I’ve finished since I got home. I was writing a lot as we were going but that helped to fund the trip to a large extent. My task now is to sell some of the ideas and experiences I’ve had to editors as unusual stories that will hopefully be of interest.

We did things that we maybe wouldn’t have normally done – spent money on a particular activity, attraction or museum – and made an effort to talk to more local people as that’s where the most interesting stories often come from. I deliberately planned an itinerary and a route that would take us to places that other people haven’t been to so I would get an unusual angle.

How does being a freelancer fit in with your life?
I would say my work/life balance in this job has been better than in any other job I’ve had. There are times when I’m obviously very busy and I don’t stick to regular hours, so I may work on a Sunday or in the evenings, but as long as I don’t have a pressing deadline I have the flexibility to take a day off when I want. There are obviously downsides to it as well, times when I’d be happy to take time off but I am too busy or a time when it’s raining and I’ve nothing to do and the work is not there.

Do you ever turn work down?
Turning work down is difficult, sometimes you sit there and think, ‘I can’t take any more work this month’, and then someone offers you something and you say ‘Yes, of course, I’ll get that done’. I can always find another two hours in the day because I’m not at a point where I know there’s more work coming. I don’t think I’ll ever get to that point because there’s always that fear that there’ll be a quiet period around the corner.

How do you use social media?
I use social media without any real plan. I was reading something this morning about how to get more retweets and found the whole thing depressing. Once you start manufacturing your tweets everything becomes false and phoney. I’ll tweet when I want to and it’s rarely pushing out my travel stuff. I’m also fiercely independent about it so I won’t use my tweets to promote anybody’s products or competitions.

I tried Pinterest but didn’t have the time or see the point of it. I have a Google+ account which I don’t use but as it is Google I don’t really want to ignore it. I also created a 501 Places Facebook page but I don’t really know why it’s there. Twitter is overwhelmingly my main social media outlet.

How do you work with PRs?
There is no commercial activity on my blog, I decided that by default and it’s been quite useful to have a clear line on it. I work with PRs on a lot of my commissioned work; I’m going to Scotland next week for a commissioned piece and the PR from Visit Scotland has been absolutely fantastic in organising the trip.

Another example is from the round the world trip – I had a BBC commission in Macau and because I know the PRs at Hume Whitehead, who represent Macau, I dropped Sarah a line and when she found out it was a BBC commission she immediately took care of all my arrangements. PRs are very good in terms of sources of information and getting things organised for commissioned trips.

My biggest frustration with PRs is getting unsolicited emails with large attachments. There is nothing worse than getting an email about some hotel I don’t care about with a 5MB attachment when I’m travelling with a mobile device. It takes 20 minutes to download and I think, ‘oh bloody hell, what have you done that for’. There’s no excuse for anyone to send unsolicited emails with attachments of any size – that’s my biggest bugbear.

From a journalist point of view, my involvement with PRs has been more reactive than proactive but it’s helpful to know who represents who.

What’s the best experience you’ve ever had when travelling?
Standing on an active volcano in Hawaii and poking the red hot lava with a stick. It was very cool. Well it was very hot, but cool.

Is there anywhere you haven’t been you’d like to go?
Loads of places. The first place I’d say is Brazil – it’s a country with so much going on and I’d love to go to the Amazon Jungle, see the Iguazu Falls and experience the buzz of Rio.

Do you have any surprising hobbies or interest?
I like being a tourist in London. I try to go into London at least once a week with my wife and play the dumb tourist, taking photos of people and places and enjoying the city as a visitor.

What would your super power be?
To fly very quickly between places or teleport myself. For all the travelling I do, I hate flying.

Who would play you in a film?
People have generously told me I look like Nicolas Cage so I’d probably have to go with that, but I wouldn’t envy him the role.

Editorial information on Andy Jarosz, the BBC, MSN, National Geographic Traveller as well as thousands of other media contacts and outlets, can be found in the CisionPoint media database.