You are here: Home / Q&A / Journalist Spotlight: Luke Westaway Part Two
Previous Back to all Next

Luke Westaway is the editor of Crave at CNET UK and recipient of the Digital Editorial Individual Award at the AOP Digital Publishing Awards. In the second part of his interview, Luke talks about video content, working with PR, dinosaurs and  3D printing.

Read the first part of the interview covering Luke’s past, being part of a US website and working as a blogger. 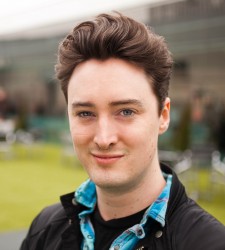 How do you work with video?
We have a video producer and we think really hard about what’s best for video. I am personally really into video – I love making it and I love the fact it has all the flexibility of the internet that you don’t get on TV. We do think hard about what will make a good video, we don’t want to put things in video just for the sake of it. There are loads of instances where text is miles better; it’s always faster, for example, to get news out in text form. On the other hand there’s loads of times I’m writing when I wish I could show the product. Sometimes it can be really hard to describe things, like a tiny product detail, but as soon as you see it you understand.

Video also works really well at trade shows because people want to see these products in someone’s hands. The sense you get of the product looking at a press shot is completely different to seeing it in someone’s hands being poked and prodded. It stops it being this mythical, white-background render and turns it into something real.

What do you look for from PRs?
There are two sides to it. First, there is the, ‘We need a response/statement/quote’ side, and then there’s the, ‘We need to be sent this product to review it’ side. A great example of PR is when they respond even if it’s just saying, ‘Yes we’ve received this and we’re looking into it’. A lot of the time you don’t get a response and it’s difficult to know if the email has even registered.

I know lots of the people who make the decisions at the companies we’re dealing with (like Samsung or Sony) are on the other side of the world and asleep. It’s difficult sometimes for the PR agencies we deal with to get an answer turned around very quickly.

Do you have any tips?
We like to see things ahead of time as much as possible. We like embargoed releases and to be given a heads-up on news because speed counts. Exclusives are also great. On the product side we just need to see things as soon as possible. It is sometimes frustrating knowing these phones are out there and not being able to get our hands on them. A lot of that time that’s not an agency’s fault.

What I would value more than being given a, ‘We can’t tell you what’s going on at the moment’ response, is knowing what the relationship between the agency and client is like. Obviously that’s something they have to be careful about disclosing but putting it in context so we can know whether we need to make a better impression would be great.

Do you use PR pictures?
We do because tech products get announced and then it’s a little while longer till we can get our hands on them (or they’re even in the country). Putting images, or links to images, in with press releases is super crucial because we can’t publish anything without a picture.

What’s your favourite gadget?
Absolutely the Kindle; I love the Kindle. I love how cheap it is and how long the battery lasts. It’s a brilliant gadget because most of the technology we look at are personal purchases that you have to save up for but the Kindle, and other e-book readers like it, enter into the you could actually buy it as a gift category.

Gadgets are always presented in a, ‘Why not buy your dad an iPad for fathers’ day’ way, and no one is doing that because it’s ridiculous. I’m not going to make dad’s year with an iPad, that’s ludicrous, but a Kindle is in the realms of possibility. It works in sunlight and I think it’s a simple, elegant replacement to physical books. I just really like it.

What’s the next big thing in tech?
There’s a lot of stuff at the moment about wearable gadgets, like Google Glass and the speculation that Apple is making a watch or watch-like device. I’m not super convinced by all that stuff, though I think Google Glass is really exciting and it will be really fun to see where that goes and what you can do with it.

To be honest, the thing I’m more excited about is 3D printing, which in terms of completely changing the world has a far better chance than wearable tech. 3D printing is amazing; I went to the 3D Print Show last year and saw some of the possibilities it creates, like building your own house.

What would your super power be?
Ah man, I have thought long and hard about this and I always come back to flying. If I could fly that would sort me out. Unless I opted for a superpower that gave me the ability to fly tangentially, in which case I would opt for Magneto’s metal-moving powers. He uses that to fly – he can totally fly – and he can also manipulate metal.

Do you have any surprising hobbies or interests?
I’m really interested in dinosaurs. It’s one of those childhood interests that never went away. So yeah, I do love a good fossil.

Who would play you in a film?
I’ve been compared a few times to Daniel Radcliffe because apparently we have similar eyebrows. He wouldn’t be my first choice; I’m just going with what the people believe. My first choice would probably somebody who doesn’t look anything like me.

Editorial information on Luke Westaway, Crave, CNET and thousands of other media contacts and outlets, can be found in the CisionPoint Media Database.