You are here: Home / Q&A / Journalist Spotlight: Rhodri Marsden
Previous Back to all Next 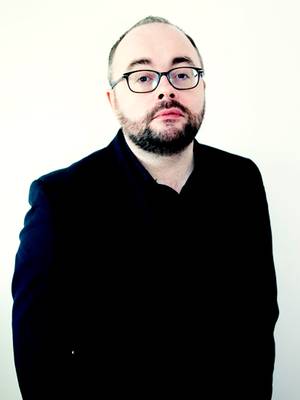 Rhodri Marsden writes a weekly lifestyle column and monthly technology column for The Independent, a weekly column about Twitter for Shortlist.com and technology features for other publications. Rhodri spoke to Cision about David Bowie’s vegetable juicer, a crackpot inventor and working in a bubble.

How did your career develop?
Originally I worked in the music business, doing logistics for bands playing in Eastern Europe. I remember failing to find David Bowie an industrial strength vegetable juicer in Budapest on a Sunday. In 2001 I started writing comedy content for websites for the BBC, E4 and others; when I realised that comedy was fiercely competitive and soul-destroying I started writing features and regulars. First for Time Out, then The Independent, the Observer Music Monthly, radiotimes.com, The Guardian, Olive and many others.

What’s the balance between technology and your Life on Marsden column?
As you say, I do a preposterously self-indulgent weekly column about myself for The Independent called Life On Marsden, a monthly tech column for the same paper called Cyberculture, a weekly column about Twitter for Shortlist.com, and technology features here and there.

The balance? Well, I spent 20% of the week panicking about and writing the column about myself, 60% of the week working on tech-related work and ideas, and 20% of the week staring into space. It might look like I’m doing nothing, but thinking is an important part of the creative process. Apparently.

How does playing in a band fit in with being a journalist?
Playing in a band fits in perfectly with journalism, except when you’re on tour and you have a stack of deadlines and you’re typing with your laptop on your knee in the lobby of a Premier Inn outside Coventry. That’s harrowing.

How significant are columnists to digital media?
Opinion drives digital media, cos argument and disagreement equals traffic equals revenue. So the opinionated are hugely significant… Columnists, in the traditional sense of the word, are obviously less important than they used to be – just because their written content when transferred to the web only forms a minuscule percentage of the great writing that’s out there.

What is the future of print?
I don’t know. I like newspapers. I like getting a balance of news that’s decided by a talented editorial team, and I vastly prefer that to getting my news filtered through whoever I’m friends with or following on social media. I’d hope that newspapers will soldier on for a while, but to be honest I’m a bit head-in-the-sand about it.

How will the new press regulations affect your role, if at all?
Barely. I’ve only ever had one legal threat in thirteen years, and that was from an inventor who I described as ‘crackpot’. He insisted that he wasn’t a crackpot, but fortunately I had a minidisc recording which proved that he was.

How do you use social media?
Heavily. I follow a lot of people, I’ve created a complex array of Twitter lists and Facebook groups to try and keep the signal to noise level high. When my self-esteem dips at around 2pm each day I’ll post a lot of stuff online to try and reassure myself that people like me.

How important are journalist-to-journalist relationships?
I pretty much work in a bubble. Not an actual bubble. A room, in my house. I’ve probably visited The Independent’s offices less than ten times in a decade – so I don’t work alongside journalists and generally don’t socialise with them either. Not because I don’t like them. They’re lovely. I just kind of get on with it.

How do you work with PRs?
They relentlessly send me things, and when they send me something interesting I’ll reply to it.

What do PRs do that’s good?
Presenting news from their clients in a way that can form part of a bigger story, be part of a balanced piece, and understanding that it can’t be an advertorial.

What do PRs do that’s bad?
Doing the opposite of the above.

What’s the next big area in the technology industry?
Wearable tech, the integration of computing power with the body… We’re seeing the beginnings of it with RFID wristbands, Google Glass and so on, and it’s only going to grow and grow.

What would your super power be?
Pre-empting and preventing the tantrums of others by deploying soothing chat.

What’s your motto in life?
Let other people make bad choices with impunity.

Who would play you in a film?
W C Fields, if he wasn’t dead.

What one thing could you not live without?
Fingers.

Editorial information on Rhodri Marsden, The Independent and thousands of other media contacts and outlets, can be found in the CisionPoint Media Database.