You are here: Home / media measurement / Thatcher and the (social) media
Previous Back to all Next

Described on the BBC News Channel as the first major public figure to have died in the era of Twitter, Baroness Thatcher will be the topic of online discussion for the foreseeable future. How the digital and social spheres have reacted to the news is already a question being asked from Stuart Heritage and his ‘Who is Margaret Thatcher? Confusion reigns online’, to Patrick Smith’s ‘How breaking news works online in 2013’.

Using Cision Social Media, we know that since yesterday the conversation about Thatcher has garnered over two million online mentions – over a million more than last night’s Manchester derby. Using Conversation Clouds we can see the difference between breaking news and discussion. 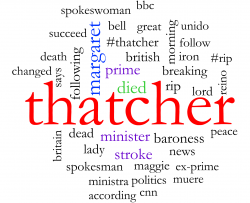 The first Conversation Cloud shows the nature of breaking news with the same key facts being shared; ‘prime’, ‘minister’, ‘stroke’ and ‘died’ make up the main parts of the conversation. Other words, ‘according’, ‘cnn’, ‘bell’ (Baroness Thatcher’s spokesperson was Lord Bell) and ‘reino’ ‘unido’ (Spanish for United Kingdom) contribute to the emerging details of the story. 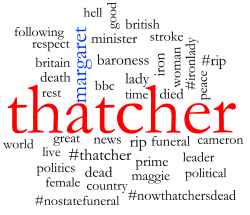 The second Conversation Cloud shows the discussion becoming diluted as the recurring words are much smaller than the topic ‘thatcher’. There are also more hashtags as different opinions gained support, with #rip generally holding positive connotations and #nostatefuneral generally been seen as negative. ‘Rip’ also appears without a hashtag and it is these three letters which seem to be the definition of death etiquette on Twitter. Of the hashtags, it was ‘#nowthatchersdead’ that became the most popular, largely after causing confusion among people who thought it was declaring that Cher was dead.

When the mentions are sorted by country, the full extent of Margaret Thatcher’s global influence becomes clear. 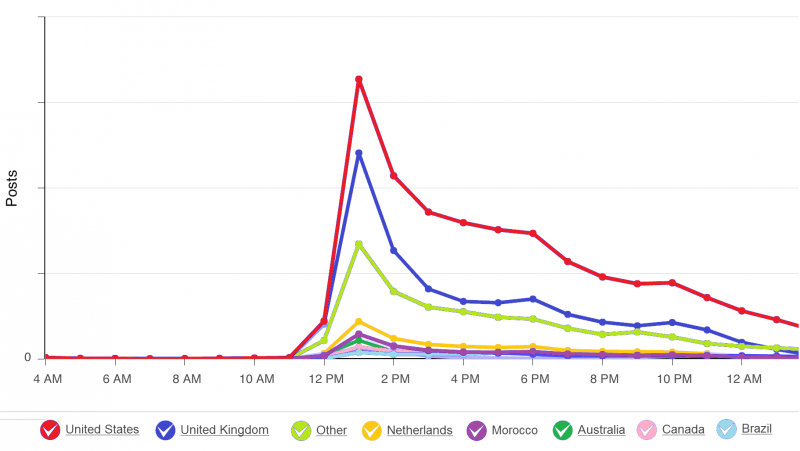 Margaret Thatcher provoked strong opinions on all sides and her death will be thoroughly discussed over the coming days. With her funeral set for Wednesday 17 April, expect more online conversation, opinion and analysis to come.

All data and graphs from Cision Social Media via CisionPoint.