You are here: Home / Q&A / Media Spotlight: Fashion London
Previous Back to all Next

Fashion London magazine is relaunching this Friday to coincide with the start of London Fashion Week. 100,000 copies of the glossy will be distributed across the capital and be available outside underground stations, on racks in airports and corporate offices, and at Somerset House – the home of LFW. Vuelio spoke with editor Clare Farmer about the magazine’s content, its LFW after-party and working with PRs.

Designed for the commuter market, the magazine will be a slim 28-pages. Clare explained, ‘we want the magazine to be easy to hold and comfortable to read’. The size affects the advertising within the magazine, which will make up about half of the content. Clare believes that with a thinner publication, each advert will stand out more than it would in a traditional fashion title.

Fashion London is aimed at both men and women, with the front page tagline ‘Purely fashion for him and her’, hoping to attract both genders in equal measure. The content will also reflect this aim, with a mix of male and female fashion across its regular features, such as Fashion and the Economy, and lighter streetstyle articles.

Following a successful soft launch, the magazine is relaunching in print, though a PDF version will be viewable on its website. Clare said: ‘I think fashion photos look better in print so our digital focus is on social media. At the moment the Fashion London website is mainly for news about the print magazine, though that might change in the future.’

The launch date is not the only thing Fashion London shares with LFW, Clare said: ‘Just like at London Fashion Week, London-based designers and boutiques will have a chance to get coverage in Fashion London they may not otherwise receive’.

The ties go deeper still, as Fashion London has teamed up with London Ethnic to host a LFW charity after party in aid of Help A Capital Child. The party reflects the juxtaposition between the luxuries of LFW and the disadvantages of those less fortunate in the capital, and gives attendees a chance to give something back. Clare believes it is the only party with tickets on general sale, rather than being an exclusive event.

One of the unique selling points of Fashion London is its exclusively fashion-focused editorial, without deviation into other subjects. Feedback from the PRs and brands that Clare is working with has so far been positive; the general consensus is that this is a new concept in fashion media and a welcome addition to the industry.

When working with PRs, Clare prefers emails over phone calls and, where possibly, a lookbook for future reference. Clare said she is open to collaborations and the more PR contact she gets, the better.

What one item of clothing could you not live without?
Anything cream, white or beige.

Are there any up-and-coming designers that are ones to watch?
Bracher Endem, who design beautiful bags, and BasharatyanV.

Who is your style icon?
I don’t have one. I choose clothes I like to look at and because of the way they look and feel on me, not other people.

What would your super power be?
If I’m allowed to cheat a bit then I’d like to create wishes that come true. If not, I’d like to be able to predict things.

Who would play you in a film?
Angelina Jolie because she portrays powerful and physically strong females, for example in Tomb Raider, and appears to be individual and strong in her personal life. She also works with charities, exploiting her fame in a positive way. (Plus she complemented me on my coat once in a London airport!).

Editorial information on Fashion London, Clare Farmer and thousands of other media contacts and outlets, can be found in the Vuelio Media Database. 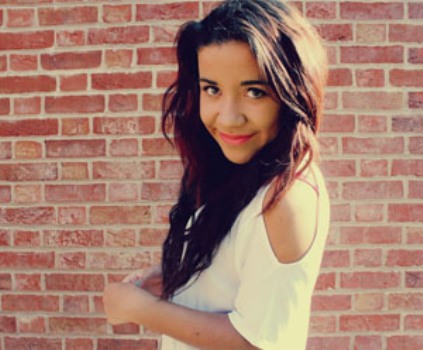