You are here: Home / journalism / Men still dominate newspaper front pages
Previous Back to all Next 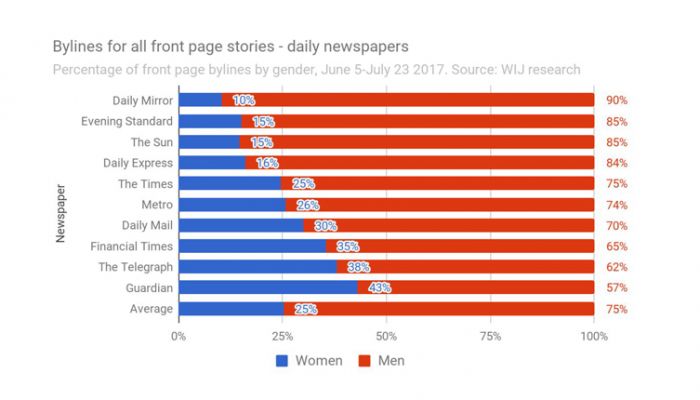 Male journalists are still in the majority when it comes to national newspaper front pages. A study by Women in Journalism (WIJ) has found that just 25% of front page stories were written by women in June-July 2017, a measly 2% more than the average in 2012.

The Daily Mirror had the lowest count with just 10% of front page bylines featuring women while the Guardian led the way though still had an underwhelming 43%.

Some papers have actually slipped backwards from 2012, with the Express falling furthest having 50% female bylines in 2012 but just 16% in 2017. Other papers to go backwards include the Daily Mirror (down 11%) and the Sun (down 3%).

WIJ said: ‘It has long been argued that time and increasing numbers of women in the media and public life will fix our long-established ‘women problem’; that as more women reach the top of the profession, the male lens will vanish. But as the campaigners for more women on FTSE 100 boards have discovered, the pace of change is glacial; on current progress it will take 100 years to reach parity between men and women in business. Our new research suggests the same is true of journalism.’

The Guardian’s lead, among five papers to improve, could be because it is the only paper with female political editors (it has two that job share) and politics is so often the source of a paper’s lead story.

WIJ also suggests the replacement of Alan Rusbridger with Katharine Viner has had an impact on women being more visible, arguing culture change can come from the top. It does, however, counter this with the fact the number of female bylines increased (though marginally from 8% to 15%) under George Osborne’s editorship compared to Sarah Sands’.

Another explanation WIJ has for a dearth of front page female bylines is that most news desks, with the exception of the Times, Sunday times and Metro, are run by men who assign the stories in the first place. Though how news stories are assigned and the reasons why, is probably worth further exploration before using this as sound reasoning.

What is clear is that female journalists are underrepresented on news front pages, and by extension the biggest stories. More needs to be done to ensure women are being fairly represented in the media.

Find out how to reach all the front page journalists and top outlets in the UK on the Vuelio Media Database.