You are here: Home / Public Affairs / PMQs: Theresa May’s word cloud – 15 November 2017
Previous Back to all Next

This week’s PMQs was dominated by funding issues across the police, NHS and fire service, as well as crime stats and universal credit. We present the word cloud for Theresa May’s answers at PMQs on 15 November 2017. 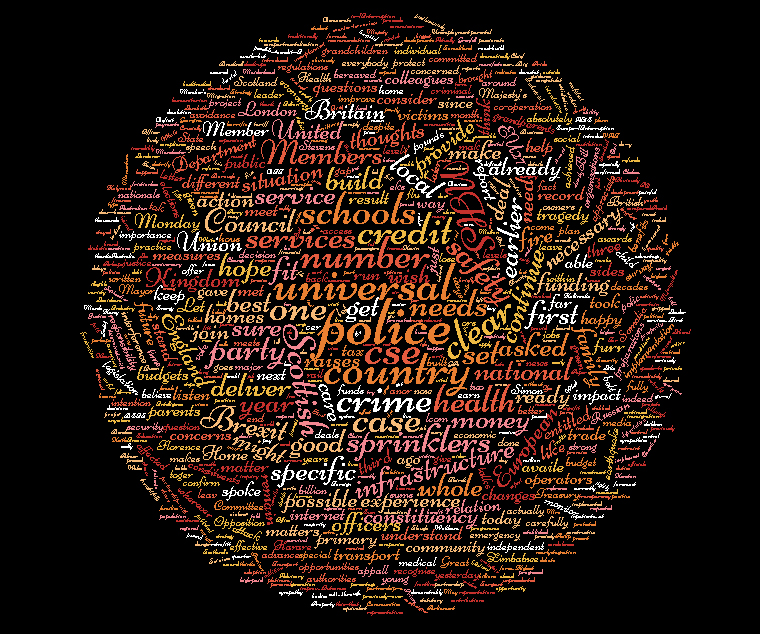 Funding
With Budget day on the horizon, it’s unsurprising that funding played a major role this week. May fielded questions about schools, the NHS, police and firefighters from MPs hoping for a say in next week’s announcements, as well as Carolyn Harris, who asked the Chancellor to legislate for a Children’s Funeral Fund.

Crime
Theresa May and Jeremy Corbyn clashed over police funding and crime stats, with the latter arguing that funding was down and crime had gone up. May disagreed, saying crime was down by almost a third.

Universal credit
Universal Credit has become a weekly topic at PMQs, and this week was no exception. There were calls to halt the reforms from Jeremy Corbyn, Stephen Lloyd and Tracey Brabin, ahead of a Commons debate on the roll-out tomorrow.

Europe
May is facing rebellion over the EU withdrawal bill, which began its journey through committee stage yesterday, and today she answered questions from Michael Tomlinson, Paul Masterton and Charlie Elphicke on the impact of Brexit.

Schools
Corbyn asked for assurances that school funding cuts would be reversed, after 5,000 head teachers wrote to the Chancellor with a request for more resources. According to May, there are record levels of funding going into schools and a fairer funding system.