At the last Prime Minister’s Questions of the year, and the one a few days before Christmas, the season’s biggest holiday was discussed along with drugs, the NHS, social care and Brexit. We present the word cloud for Theresa May’s answers at PMQs on 20 December 2017. 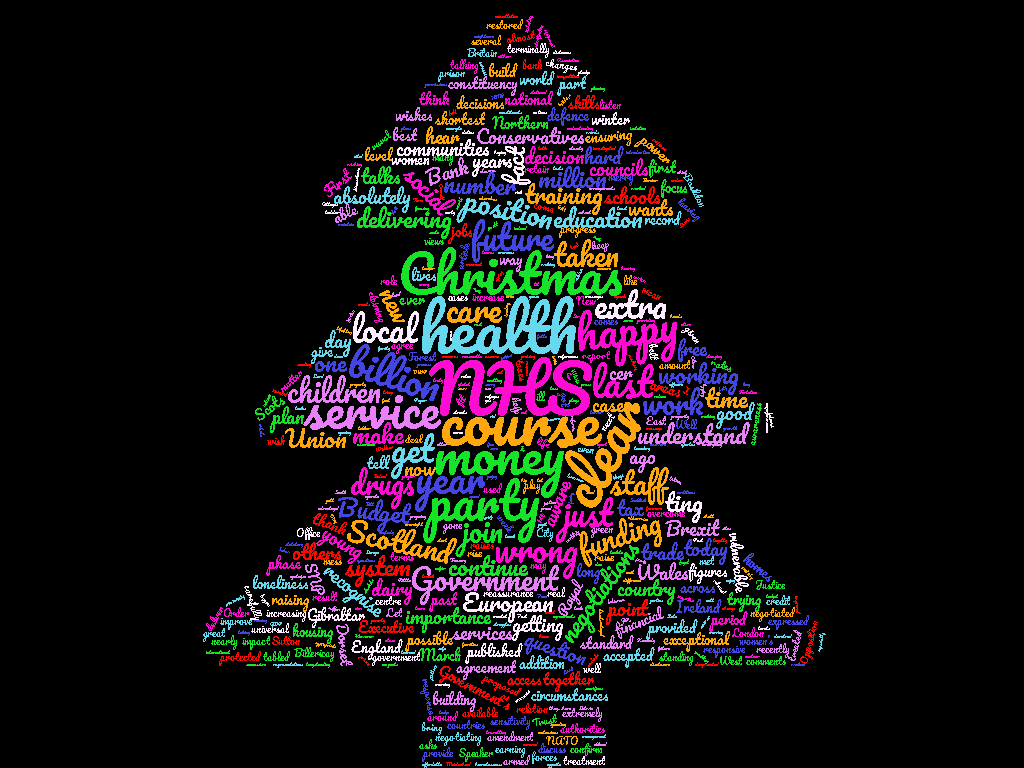 Christmas
This is the last PMQs of the year, and MPs were certainly in the Christmas spirit during this session. Aside from the usual niceties, MPs also took the opportunity to ask for increased funding for education, health and social care in the spirit of the season.

Drugs
Drug legalisation has long been an issue which has divided MPs from within parties and across the House. SNP MP Ronnie Cowan this week raised the topic of ‘drug consumption rooms’, which he said had decreased the number of HIV and hepatitis occurances in drug users, as well as crime. There has never been an overdose in a supervised drug consumption room; he asked for powers to be devolved to Scotland so they could implement these rooms. May stated that her focus was on ensuring people stayed clear from drugs, rather than on funding policies such as this.

NHS
The NHS once again took centre stage during Theresa May and Jeremy Corbyn’s first exchange. This week Corbyn began with a quote from the Conservative leader of Warwickshire country council, who has said the Government needs to tackle chronic underfunding in the NHS. May rebuked this with a much quoted statistic about Welsh failure to meet NHS targets since 2008, the Government there being run by Labour.

Brexit
Conservative MP Julian Lewis used his question for confirmation that Oliver Letwin’s amendment to the EU Withdrawal Bill, which would allow the Government to change the withdrawal date if sufficient progress on agreement hadn’t been made, would only be used in ‘exceptional circumstances’. His party colleague John Baron followed on from this by asking May to confirm that any delay would be a maximum of two months. May responded by saying it would be for the shortest amount of time necessary.

Find out how Vuelio Political Services can help you.