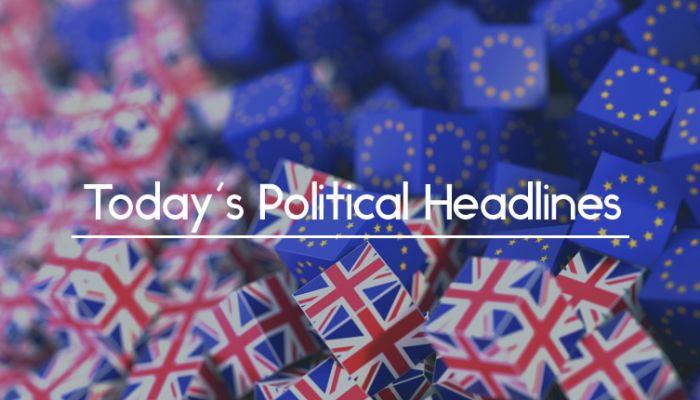 May tells MPs to unite ahead of Brexit bill votes
The Daily Telegraph reports that Theresa May will tell backbench Conservative MPs that they need to unite, ahead of this week’s votes on amendments by the House of Lords to the EU (Withdrawal) Bill. Addressing the 1922 committee this evening, the Prime Minister will say that MPs must ‘deliver on the decision made by the British people’. According to The Guardian, the Government is ‘quietly reassured’ that it has the votes to pass the bill.

Afghan interpreters win right to live in UK
The Daily Mail is claiming victory in its campaign to allow Afghan interpreters who worked with the British army to settle in the UK. Defence Secretary Gavin Williamson writes in the paper that the Government will be introducing plans to make the existing relocation scheme ‘fairer’ and pledges to ‘do what is right to honour their extraordinary service’.

MPs target Javid over Northern Irish abortion law
According to The Guardian, over 30 MPs have promised to send the Home Secretary, Sajid Javid, written questions demanding that the domestic abuse bill is brought before parliament by the autumn, so that an amendment giving Northern Irish women the right to access terminations can be tabled.

Student fees and loans ‘unfair’, Lords report claims
The BBC says a report by the House of Lords Economic Affairs Committee claims the student fee and loan system is ‘deeply unfair’ and the Government is using ‘accounting tricks’ to conceal the cost of higher education, delivering poor value for money for taxpayers. It calls for ‘immediate reforms’ including lower interest rates and restoring grants.

Banks to tell committee that he told CIA about Russian meetings
The Times claims that Arron Banks, the founder of Leave.EU, will tell the Commons Digital Media and Sport Committee tomorrow that he briefed the CIA on his meetings with the Russian Ambassador. The meetings were revealed in emails leaked over the weekend.

Homelessness could be ended in a decade, report claims
The BBC carries details of a new report by the charity Crisis, which claims that the Government could end homelessness in 10 years, if its proposals are followed, including building 100,500 social homes a year. The Daily Telegraph says that a report by the Local Government Association warns that the Right to Buy scheme might collapse, as the UK is running out of council houses.

Hancock refuses to legislate on children’s access to devices
The Guardian reports that Digital, Culture, Media and Sport Secretary Matt Hancock does not allow his children to have mobile phones and thinks children shouldn’t have access to them overnight, but will not follow the French and legislate on the matter. Meanwhile, The Daily Telegraph has launched a campaign calling for social media and online gaming firms to have a statutory ‘duty of care’ to protect children from mental ill health, abuse and addictive behaviour.

Doctors will not be sacked for ‘honest mistakes, Hunt says
The Times reports that Health and Social Care Secretary Jeremy Hunt will announce that he is to accept the main findings of a review into the use of gross negligence manslaughter, claiming that doctors and nurses who make ‘honest mistakes’ should not be prosecuted. A system of medical examiners will be created, with the ability to refer cases to coroners.