Gordon Brown spoke on Brexit, and gave his view that the Brexit vote was not a vote against the technicalities of the EU but rather down to lost jobs and low earnings. He also suggested that none of the options the Government are putting forward are good enough.

Brown spoke about the NHS and how to solve the problems it is currently facing; his favoured view is to increase national insurance contributions as people will be prepared to accept it so long as they see the money going into healthcare. The former Prime Minister also said that the Brexit votes coming up this week could be a major point of crisis for the Conservative Government.

Nicola Sturgeon was the next guest on Marr, and she repeated remarks she made at the SNP Conference by saying the obsession with securing another chance of voting for independence needs to stop. The First Minister of Scotland wants to maximise the opportunities for Scotland and provide answers to people who have questions over whether it should be an independent country. Sturgeon then criticised the infighting in the Cabinet concerning Brexit.

Sturgeon also appeared on Ridge on Sunday and said there would be a second independence referendum during her time as First Minister but she is well aware that Brexit will impact a lot of things and these decisions should not be made until further clarity is available. Sturgeon also said that if Northern Ireland gets a bespoke deal on Brexit then Scotland should also be offered a bespoke deal.

Continuing the topic of Brexit, the next guest on Marr was Keir Starmer, who criticised the lack of movement by the Government on the customs union. Marr pointed out that nearly half of Labour peers voted for the UK to stay in the European Economic Area (EEA) yet the Labour leadership is telling MPs to abstain on this vote in Commons. Starmer said he is sympathetic to the view of needing a customs union, however he does not think the EEA will provide a suitable solution to the issues around the Irish border. Starmer said he went to the Norway/Sweden border, which is a hard border, and said this will not happen as a commitment has been made to make sure there is no hard border dividing Ireland.

There was more border talk when Marr asked Starmer where the UK border will be; Starmer said it will be around the custom union countries. The Labour proposal is that the UK would be in a customs union with the EU so no need for a hard border with Ireland. Marr said for this to happen, the UK would need to be part of the Single Market. The conversation went back to the EEA, as some view this as the best way to protect jobs and the prospects of the country.

The Brexit chat did not stop with David Lidington. He made it clear that the UK will have left the EU by the end of 2019; he said everyone is working towards getting Brexit sorted. He said it is in everyone’s interest to get all facets of Brexit sorted as soon as possible. Lidington endorsed Theresa May’s toughness and said rhetoric does not matter so much. Grant Shapps was on Ridge and he also spoke about Theresa May and said it is conceivable that Theresa May could lead the Conservative Party into the next general election.

Shadow Business Secretary, Rebecca Long Bailey, spoke about workers in the hospitality sector. She looked at two areas the Labour party want to legislate in, firstly by stopping non-disclosure agreements that stop staff exposing sexual harassment. She also said Labour will legislate to make sure staff receive 100% of the tips they earn and stop practices by employers that currently stop this.

Housing Minister, Dominic Raab, apologised to the remaining families who have not been housed after the Grenfell Tower tragedy. He said as much support as possible will be given to those effected and progress is being made. Ridge asked Raab about whether there needs to be more Cabinet discipline – Raab thinks there should be, which was in reference to comments made by Boris Johnson. 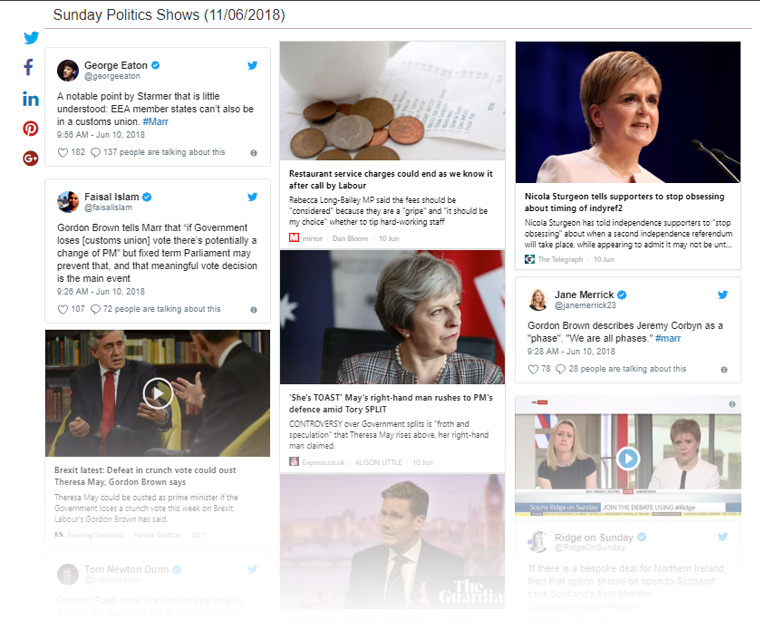