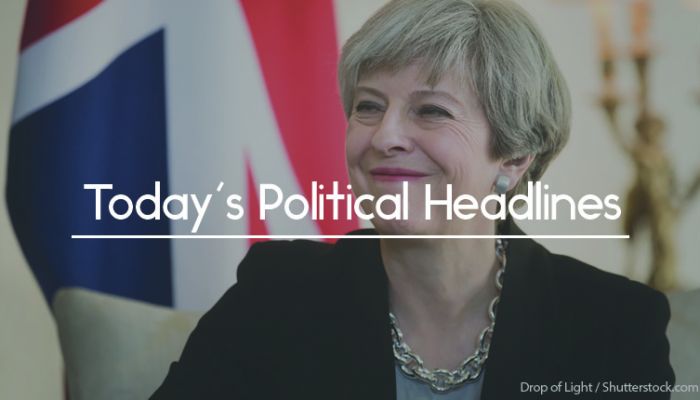 Today’s Political Headlines include the passing of the Brexit Bill, the UK’s defence, the Gosport hospital scandal and British expats.

May welcomes passing of Brexit Bill
The BBC reports that Theresa May has welcomed the passing of the EU (Withdrawal) Bill, following the decision of some Conservative rebels to back a compromise stance on a ‘meaningful vote’ on the final deal. The bill has now gone forward for Royal Assent. The Prime Minister claimed that this was ‘a crucial step’ to deliver a ‘smooth and orderly Brexit’, with a white paper and votes on the Trade and Customs Bill to follow in ‘the next few weeks’. The Guardian says that Labour MP Naz Shah has criticised Tory whips for rejecting a pairing request, leading her to discharge herself from hospital and vote in her pyjamas.

May asked Williamson to justify the UK’s role as a ‘tier one’ military power
The Financial Times claims that Theresa May asked Defence Secretary Gavin Williamson to justify the UK’s position as a ‘tier one’ military power at a ‘tense meeting’ on Tuesday, telling him to focus more on cyber warfare. A spokesman said that it was ‘categorically untrue’ that the position of the UK ‘as a leading defence nation is somehow in question’.

Campaigners warn that Gosport hospital scandal could be repeated
The Times says that campaigners have warned that the NHS could see a repeat of the opiate scandal that killed up to 650 patients at the Gosport War Memorial Hospital, because it still ignores whistle-blowers. An independent report into the scandal was published yesterday, and Health and Social Care Secretary Jeremy Hunt has said that the police will investigate new material raised by it and consider criminal charges, if appropriate.

Javid criticises EU member states over arrangements for British expats
The Daily Telegraph reports that Home Secretary Sajid Javid has criticised the EU for failing to match the UK’s progress on making arrangement for expats post-Brexit, ahead of the publication today of the UK’s settled status scheme for EU citizens resident in the UK. He asked the European Parliament and Commission to exert pressure on member states to publish ‘similar plans’ to ‘support British nationals in their countries’.

Chancellor to set out strategy for post-Brexit ‘global financial partnerships’
The Financial Times says that Philip Hammond will today use his annual speech at Mansion House to set out a strategy for securing new ‘global financial partnerships’ after Brexit, targeted at countries such as China, India, South Korea and Australia. The BBC adds that the Chancellor will admit that taxes will have to increase to fund NHS spending increases.

Government to introduce anti-upskirting legislation today
As the BBC reports, the Government is to introduce legislation to make upskirting a criminal offence today, after Tory backbencher Sir Christopher Chope blocked an earlier attempt by Lib Dem MP Wera Hobhouse. If it passes, offenders could spend up to two years in prison.

May criticises Trump’s immigration policies but defends visit
The Guardian says that Theresa May described Donald Trump’s policy of separating immigrant children from their parents as ‘deeply disturbing’ and ‘wrong’, but defended her decision to invite him to the UK next month, indicating that she would raise her concerns with him when they meet.

Speaker urged to set departure date
The Daily Mail claims that friends of Commons Speaker John Bercow have told him to make a statement naming the date on which he will step down. When originally elected, he promised to serve for nine years, and that deadline will be met on Friday. MPs who have spoken to him have reportedly urged him to resign by next summer’s recess at the latest.