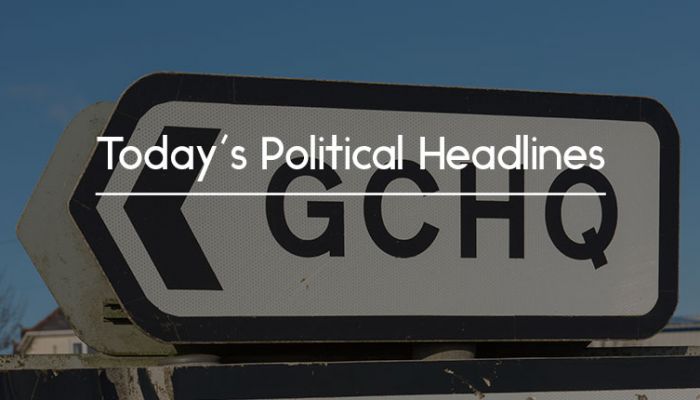 Today’s Political Headlines include GCHQ Director intervening in Brexit, MPs voting again on the ‘meaningful vote’ on the Brexit deal and a new approach to drugs.

GCHQ director intervenes in row over post-Brexit secuity
The Times carries details of what it calls an ‘unprecedented intervention’ by the director of GCHQ, Jeremy Fleming. He revealed that the UK had supplied information which had led to terrorist plots in four different European countries being prevented in the last year, and argued that the UK and Europe had benefited ‘from our work together on our collective security’. The paper suggests that this intervention was deliberately timed to support the UK’s attempts to secure continued participation in EU security policies.

MPs prepare to vote again on a meaningful vote on the Brexit deal
The BBC reports that MPs will vote again on the meaningful vote on the final deal with the EU later today, and that the result will be ‘tight’. Dominic Grieve, leader of the Conservative rebels, told The Daily Telegraph that his supporters were not ‘peeling away’, despite attempts by whips to persuade MPs to back the Government. According to The Times, Conservative whips have ‘given up’ on their attempts to persuade rebels and are instead focusing on getting Labour MPs in leave-voting areas to back the Government.

Police call for new approach to drugs as Javid announces medicinal cannabis review
The Times reports that the Police Federation’s board voted unanimously for a rethink on drug enforcement as current laws ‘have not succeeded’, calling for ‘an open, honest, transparent debate’. Sajid Javid, the Home Secretary, has announced a review of laws on the medicinal use of cannabis, but ruled out changing the law on recreational use.

Teachers should confiscate mobiles, Hancock says
Writing in The Daily Telegraph, Digital, Culture, Media and Sport Secretary Matt Hancock has said that teachers ought to confiscate mobile phones at the start of the school day, as they have a ‘real impact’ on achievement and expose children to cyber-bullying. Hancock will put forward this argument at a NSPCC conference today.

Capita awarded highest risk rating and £500m contract by Ministry of Defence
According to the Financial Times, the Ministry of Defence gave outsourcing firm Capita its highest possible risk rating, shortly before it was awarded a £500m contract to run military fire and rescue services. Jim Kennedy of the union Unite said that the decision to hand the firm the contract despite the risk assessment was ‘absolutely scandalous’.

Hammond refused to release NHS funding unless chief executive publicly backed plan
The Guardian says that it has been told by sources close to the NHS funding deal that Philip Hammond only agreed to it on the condition that Simon Stevens, NHS England’s chief executive, had to publicly welcome the funding. Yesterday, Stevens, who had previously called for a larger increase, said that the new funding represented ‘a clear gear change’.