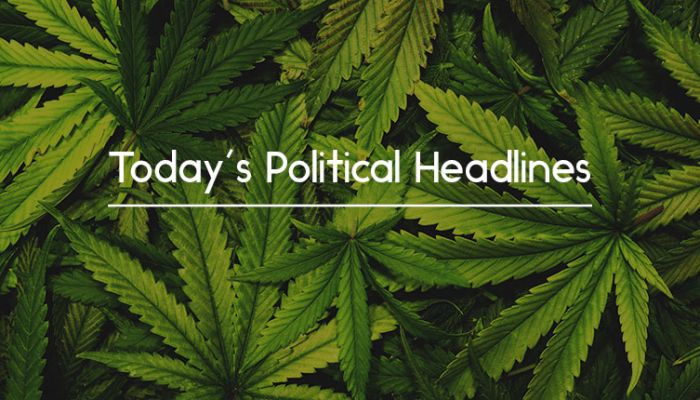 Today’s Political Headlines include Lord Hague calling for cannabis legalisation, the Government being defeated by the Lords over Brexit ‘meaningful vote’ and Hammond warning that the NHS spending boost leaves no cash for other policies

Lord Hague calls for cannabis legalisation
Writing in The Daily Telegraph, former Conservative leader Lord Hague claims that the war against cannabis has been ‘comprehensively and irreversibly lost’ and that the Conservatives should ‘be bold’ and imitate Canada, which is legalising the drug. The paper adds that Home Secretary Sajid Javid was prevented from raising the issue at Cabinet yesterday, following the controversy over the supply of medicinal cannabis to 12-year-old Billy Caldwell.

Government again defeated by Lords over Brexit ‘meaningful vote’
The Guardian reports that the Government has been defeated again by the House of Lords over the issue of a ‘meaningful vote’, after Viscount Hailsham tabled an amendment based on the deal Dominic Grieve thought he had struck with the Government last week. MPs will vote on the amendment on Wednesday. The Financial Times claims that UK negotiators are now suggesting that a deal with the EU may not be agreed until November or December, rather than early autumn as originally expected.

Hammond warns that NHS spending boost leaves no cash for other policies
The Times claims that Chancellor Philip Hammond told the Cabinet that after having to find £25bn for the NHS and other money to replace funding currently provided by the EU, there will be no funding for other policies. A cabinet minister said that Hammond had dispelled ‘any sense that the taps were about to be turned on’. The paper also reports that Theresa May has said she is prepared to use legislation to roll back Andrew Lansley’s NHS reforms.

First details of ‘settled status’ plan to be published
The Guardian reports that the Government will reveal the first details of the new ‘settled status’ immigration scheme for the 3.4m EU citizens living in the UK on Thursday. A ‘statement of intent’ will list some of the evidence they will need to provide, but will be ‘like a consultation paper’ an ‘informed source’ told the paper.

New £20m fund to combat loneliness
The Daily Telegraph says that schemes to be supported by the Government as part of a new £20m Building Connections fund to tackle loneliness include mobile coffee vans, woodworking in sheds for middle-aged men, an app for young mothers and converting redundant public spaces into ‘loneliness gardens’.

Rail firms admit they only realised the extent of problems at the ‘last minute’
The Daily Mail reports that executives from rail firms admitted to the Commons Transport Committee that they only realised at the ‘very last minute’ that their timetables would not work. The Financial Times adds that Lib Dem MP Tim Farron and local rail users have worked with a charter train operator to restore services to a line in the Lake District.

Government set to water down petrol and diesel car ban
According to the Financial Times, the UK’s plan to ban petrol, diesel and most hybrid cars by 2040 is set to be downgraded to a ‘mission’ in the ‘Road to Zero Strategy’ due to be published by the Government tomorrow. Concerns about the policy’s impact on the automotive sector have been raised by Business Secretary Greg Clark.

Javid causes rift with India over student visa scheme
The Times alleges that Sajid Javid has caused a ‘diplomatic rift’ by deciding not to include Indian students in a new fast-track visa system because of concerns about ‘non-compliance’ (i.e. disappearing after entering the country). An Indian government source told the paper that ‘relations are not at their best right now, while Lord Bilimoria warned that ‘If this is the way they treat India, they can dream on about a FTA with India.’