The Sunday Political shows were dominated by a pre-recorded interview with Theresa May – the main feature on the Andrew Marr show.

The big news was the Prime Minister announcing plans to give the NHS more funding. May said the funding was to secure the future of the health service, and claimed it would be ‘about £600m a week more, in cash’ after mentioning the slogan on the side of that Brexit bus that said £350 million more will be available. May said the money would partly come from the Brexit dividend and the country will have to contribute the rest; meaning a rise in tax. Marr pointed out that this amount of funding is not what a lot of people say the NHS needs; May responded by saying NHS England Chief, Simon Stevens, backs the plan. Marr said the historic annual increase is 3.7% and this funding is below that.

Marr asked the Prime Minister about the vote on the EU Withdrawal Bill and if she can be trusted due to the confusion among her own MPs about what was promised. May is aware of the concerns from Parliament about the way the Bill was going through Parliament. She said that Parliament cannot control what the Government can do and it should not try to overrule the vote by the public on membership of the EU. There was also a discussion around trade – May made the point that leaving the EU is about adding to the trade we already do with the EU and having our own trade policy.

Reaction from the Labour Party was not in short supply. Emily Thornberry said the commitments towards the NHS are not costed. Marr asked Thornberry whether it was enough money for the NHS; she did not directly answer, instead talking about social care and how less funding for social care means more demand for the NHS to deal with it, and the two cannot be separated.

What Marr was suggesting was that the Conservatives are now putting more money into the NHS than Labour pledged. This was pointed out to Shadow Health Secretary, Jonathan Ashworth, by Sarah Smith on Sunday Politics after he claimed it was not enough money. Ashworth responded by saying Labour was also going to invest in social care and will match whatever the Government is putting forward.

Thornberry was also asked about Donald Trump and she reiterated her remarks calling the President of the United States ‘an asteroid of awfulness’. Marr pointed out that Thornberry could one day be the Foreign Secretary and this is not the language she should be using, saying Thornberry had criticised Boris Johnson for talking loosely and that is what she is doing.

Fresh from his decision to resign last week, Phillip Lee was interviewed by Sophie Ridge. He said he had been contemplating the decision for weeks and it was all about Parliament having a say on Brexit. Lee said he is in Parliament to represent the best interests of his constituents and he must do what he thinks is right. Lee said he told the Prime Minister before he announced his resignation. Ridge attempted to dig deeper into the decision Lee made, as he was the only person to resign over this issue in the Government. In the vote he abstained and she asked if it was worth it. Lee said he feels he has moved the Government on the issue. 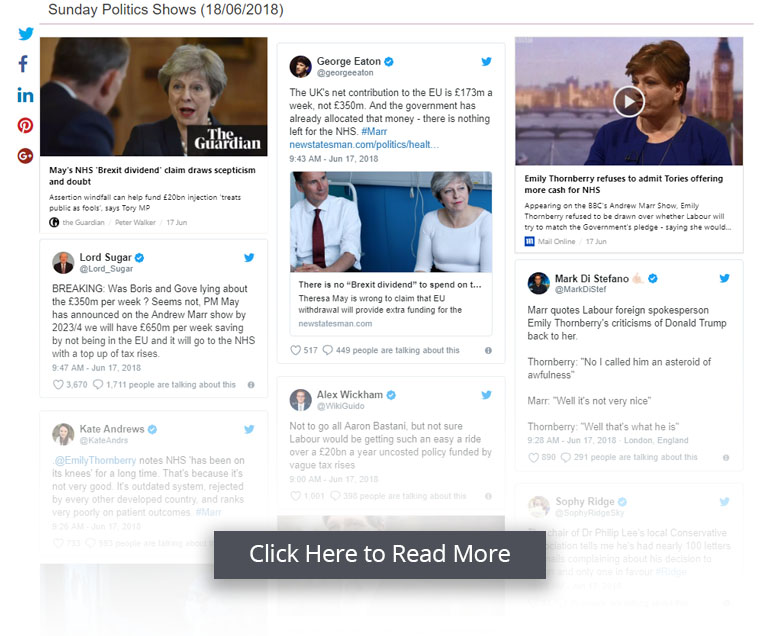