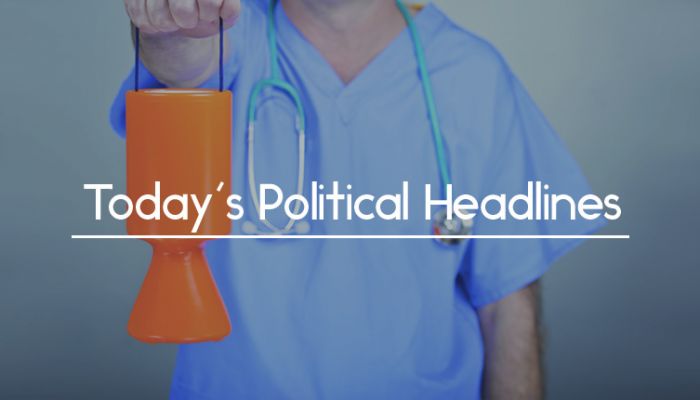 £11bn ‘black hole’ in NHS funding plan
The Times claims that there is a £11bn ‘black hole’ in Theresa May’s £25bn NHS funding plan, due to be announced in a speech today. Measures to fund the policy that have been discussed include freezing personal allowance and national insurance thresholds, increasing borrowing and deferring corporation tax rises. Ministers hope that higher growth will help to fill the gap, but experts, including the Institute for Fiscal Studies, have rejected May’s claims of a ‘Brexit dividend’. The Daily Telegraph reports that other areas, including defence, schools and police, will lose out on spending increases as a result and that the Government is considering reviving Sir Andrew Dilnot’s proposed cap on social care costs.

Report calls for defence spending increase
The BBC carries details of a report by the Commons Defence Committee, which calls for defence spending to increase from 2% to 3% of total GDP in order to meet incoming threats, including from Russia, terrorism, extremism and cyber-warfare. The report also warns that current spending levels are ‘far too low’ and that the army is at risk of being ‘outgunned’.

European Commission bans no-deal Brexit talks on aviation
The Times claims that the European Commission has prevented aviation regulators from holding backstop talks to keep planes flying in the event of a no-deal Brexit until March 2019. The paper suggests that this is ‘a move to raise pressure on No 10’, with a ‘senior industry figure’ warning that it will not be feasible ‘to cobble together a last-minute deal’.

Chope claims that he has been ‘scapegoated’ after blocking upskirting bill
The Guardian reports that Christopher Chope, the Conservative MP who blocked a bill to make upskirting a criminal offence, has claimed that he has been ‘scapegoated’. He has claimed that he supports the bill and only objected to it for procedural reasons. Wera Hobhouse, the Lib Dem MP who proposed the bill, has called on him to make ‘a full apology’ and Theresa May has promised that the Government will take on the bill.

Conservative Party accepted over £200,000 from former Russian defence official
According to the Daily Mirror, the Conservative Party has accepted over £200,000 in donations from former Russian defence chief Alexander Temerko since Theresa May became Prime Minister. Labour’s Jon Trickett said that May had ‘serious questions’ to answer.

House of Lords criticised for resembling a ‘private members’ club’
The Sun says that a report by the Electoral Reform Society criticises the House of Lords for ‘increasingly looking like a Westminster private members’ club’. 39% of members worked in politics before getting a peerage, and just one has worked in a blue-collar job. Labour MP Frank Field is to table a bill calling for the House of Lords to be abolished and replaced by a mix of elected members and experts.

Dimbleby to leave Question Time after 25 years
The BBC reports that David Dimbleby is to retire from presenting Question Time in December, having chaired the programme since 1994. The corporation’s director general, Tony Hall, described him as ‘a titan in British broadcasting’ and a ‘champion of the public’.