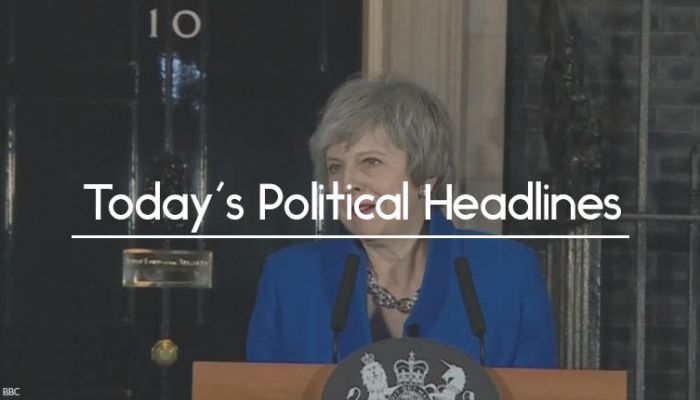 Senior Conservatives tell May to reject customs union
The Times reports that thirteen former Cabinet ministers and Sir Graham Brady, Chair of the 1922 Committee of backbench Conservative MPs, have written to Theresa May, arguing that she should reject Labour’s demands for a customs union with the EU after Brexit. All of the members of the group, which includes Gavin Williamson, Boris Johnson and Dominic Raab, point out that they voted for May’s deal in March. The BBC says that the UK’s chief Brexit negotiator, Olly Robbins, is visiting Brussels today to discuss how quickly changes could be made to the political declaration on future relations between the UK and the EU.

Top economist warns of rising inequality
The Guardian says that Sir Angus Deaton, the Nobel-prize winning economist leading a review of inequality in the UK with the Institute for Fiscal Studies, has said that rising levels of inequality mean that the UK is at risk of following the example of the USA, one of the world’s most unequal nations. He told the paper that ‘there’s a real question about whether democratic capitalism is working, when it’s only working for part of the population’.

Hunt calls for more defence spending
The Daily Telegraph says Foreign Secretary Jeremy Hunt has said the UK should ‘decisively increase’ defence spending, claiming he favours spending 4% of GDP on the armed forces, rather than 2%. He warned of the risks posed by Russia and China, cyber warfare, and a ‘conflict happening by accident’ as tensions between the USA and Iran increase.

Eight of the UK’s top 20 hedge fund managers donated to Tories in last two years
In an exclusive, the Daily Mirror carries details of research by Labour which reveals that eight of the 20 wealthiest hedge fund managers in the UK have donated to the Conservatives in the last two years, amounting to £2.9m. Shadow Cabinet Office Minister Jon Trickett said that this explained why ‘the Tories have failed to tackle runaway inequality’.

Gove backs calls for tougher fines for leaving engines on
The Times says that Environment, Food and Rural Affairs Secretary Michael Gove is backing calls from Westminster City Council for councils to be empowered to instantly fine drivers who repeatedly leave their engine running while parked. Council leader Nickie Aitken also called for a ‘four-figure’ fine for company vehicles, in place of the current £20 to £80 fine.

Javid resists pressure to allow asylum seekers to work
The Sun says that Home Secretary Sajid Javid is resisting demands from the Treasury to allow asylum seekers to work, in a bid to reduce the cost of benefits and bring in more income tax. The change could form part of the new post-Brexit immigration rules, but a Home Office source asked how it could ‘allow people to work in any job that involves a degree of trust when we are yet to establish exactly who they are’.

Heidi Allen challenges Nigel Farage to a debate
The Guardian reports that Heidi Allen, the leader of Change UK, has challenged her counterpart at the Brexit Party, Nigel Farage, to a televised debate ahead of the European elections. She said that the debate would be between a vision ‘which seeks to divide communities, demonise migrants and blame all of the world’s problems on the EU’ and one which puts the UK ‘at the centre of the global community and leading on the world stage’.

Domestic policy is drying up as Brexit builds momentum, stay on top of everything with Vuelio Political Services.