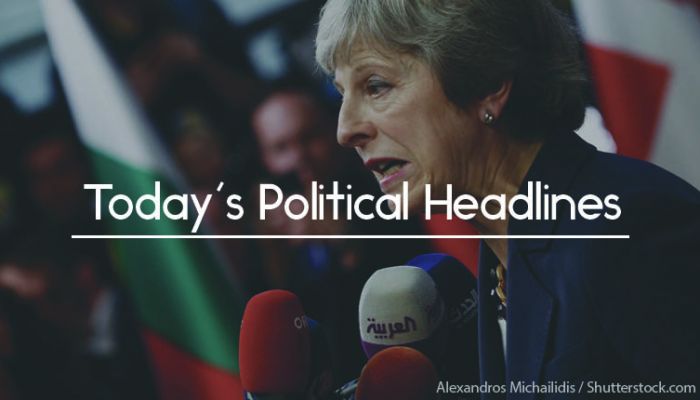 Today’s political headlines includes Cabinet ministers to urge May to abandon talks with Labour, Starmer doubts Parliament would approve a cross-party deal with no referendum, Treasury confirms world’s first plastic tax and councils to be required to give domestic abuse victims safe accommodation.

Cabinet ministers to urge May to abandon talks with Labour
The Times says that Cabinet ministers are pressuring Theresa May to abandon the Government’s talks with Labour over Brexit. Instead, ministers who favour reaching a deal with the EU will tomorrow ask the Prime Minister to outline a timetable for indicative votes by MPs to take place after the European elections and resist attempts to increase no-deal planning. Chancellor Philip Hammond reportedly told colleagues that the idea that an acceptable deal could emerge from the talks was a ‘false premise’.

Starmer doubts Parliament would approve a cross-party deal with no referendum
Shadow Brexit Secretary Keir Starmer has told The Guardian that he doubts that a cross-party Brexit deal would pass through Parliament without a confirmatory referendum being included, but claimed that only Labour could deliver such a referendum. He said that the Government had ‘not really’ shown willingness to change its red lines, adding that if Theresa May set a date for her resignation this would undermine the talks and that ‘it would be wrong’ for the talks to continue for much longer if progress seemed unattainable.

Treasury confirms world’s first plastic tax
The Daily Mail is celebrating a ‘major victory’ for its ‘Turn the Tide on Plastic’ campaign, after the Treasury confirmed that it is going ahead with plans for the world’s first plastic tax, which will affect manufacturers who don’t use at least 30% recycled content in their plastic. This will also boost the recycling industry, by increasing demand. Treasury Secretary Robert Jenrick said that less than half of plastic is recycled and ‘we can’t go on like this’.

Councils to be required to give domestic abuse victims safe accommodation
The Sun says that Theresa May will announce today that all councils will be legally required to give safe accommodation to domestic abuse victims, ending the present ‘postcode lottery’ of provision. The paper hails the news as a victory for its ‘Give Me Shelter’ campaign and carries an article by May, in which she vows that ‘whoever you are, wherever you live and whatever the abuse you face, you will have access to the services you need to be safe.’

European drivers buy twice as many electric cars as British drivers
The Times claims that a new report by the European Automobile Manufacturers Association shows that drivers in other European countries bought twice as many electric cars as those in the UK, as the Government made significant cuts to its grants for the vehicles. The Department for Transport said that the UK was at the ‘forefront’ of green cars.

Tory MPs angered by party’s own election leaflets
The Daily Telegraph reports that Conservative MPs have been angered by a leaflet produced by the party ahead of the European elections, which encourages recipients to lobby Brexiteer MPs to back Theresa May’s Brexit deal in order to stop the elections from going ahead. Priti Patel described the leaflet, and associated website, as an ‘outrage’.

Cashless society will affect elderly and poor
The Financial Times carries details of a new report by the Commons Treasury Committee, which warns the UK risks ‘inadvertently becoming a cashless society’ unless the Government takes action, leaving people, such as the elderly and those on low incomes, vulnerable. The committee says the Government should be prepared to force banks to keep branches open.

Food businesses pledge to cut waste
The Daily Telegraph says that some of the UK largest food businesses are to pledge to halve food waste by 2030 at a symposium hosted by Environment, Food and Rural Affairs Secretary Michael Gove today. Participating firms include Tesco, Sainsbury’s, Waitrose and Nestle.

It could be a crunch week for Brexit talks, don’t miss any breaking news with Vuelio Political Services.