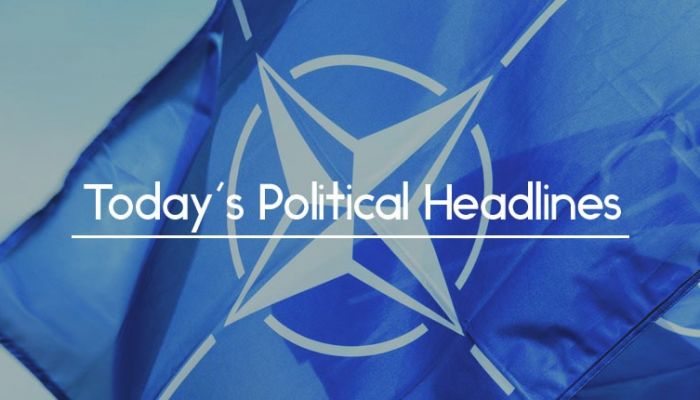 Today’s political headlines are dominated by Brexit with Theresa May under pressure to publish Brexit legal advice and her meeting with NATO leaders ahead of the outline deal. There’s also a call to scrap the benefits freeze and Javid telling the Met chief to ‘step up’ the fight against knife crime.

May under pressure to publish Brexit legal advice

Theresa May is facing mounting pressure to publish the full legal advice she has been given on the Irish backstop. The Sun reports that Labour has allied with Tory rebels – including Jacob Rees Mogg and Environment Secretary Michael Gove – in order to force May to release the information. Shadow Brexit Secretary Keir Starmer has threatened to use ‘parliamentary procedures’ if May refuses to do so.

Tories call on May to scrap benefits freeze
The Times reports that Theresa May has been advised by fellow party members to put an end to the ‘immoral’ freeze on benefits. May has been warned that failing to do so would damage the party at the next election.

Javid tells Met Chief to ‘step up’ in fight against knife crime
The Financial Times reports that Home Secretary Sajid Javid has told Commissioner of the Metropolitan Police Cressida Dick to ‘step up’ and get violent crime ‘under control’ after five fatalities in the past six days in London.

Prince Charles: ‘I won’t be a meddling King’
The Telegraph reports that ahead of his 70th birthday, Prince Charles publicly vowed that he will not be a ‘meddling king’ but will operate within the constitutional parameters set out for a monarch. The Prince, who has always had the reputation of interfering in public life on issues like architecture and environment, said that he completely acknowledges the fact that his role as the King will be completely different to his role as the Prince of Wales.

France and UK must strengthen links ‘to hedge against Trump’
The Guardian reports that in order to hedge against the unpredictability of Donald Trump’s White House, France and the UK need to overcome the risks of Brexit and ‘deepen their military alliance’. According to former French Prime Minister Bernard Cazeneuve and former head of NATO George Robertson, there is a need for British and French intelligence agencies to work together to make sure that military forces are shared and concessions are made in the Brexit talks between UK and Brussels to bring the two allies closer together.

Under pressure to get results? You need Vuelio Political Services.