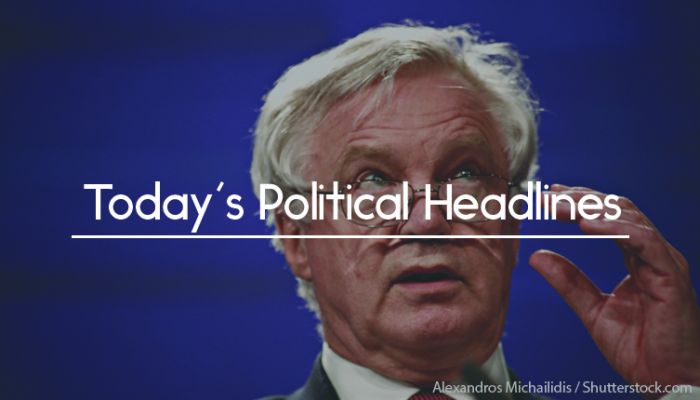 Today’s Political Headlines include the promise of a Brexit white paper, a potentially ‘illegal’ customs plan, the Carillion collapse and the Windrush scandal.

Government promises ‘significant’ Brexit white paper
The BBC reports the Government has claimed a new white paper on Brexit to be published before the EU summit in June will be its most significant publication on the EU since 2016. David Davis has told colleagues that it will include ‘detailed, ambitious and precise explanations of our positions’.

Customs partnership plan might be illegal
The Times claims that David Davis has told Theresa May that her preferred plan for a customs partnership with the EU could be illegal under international trade law. The Attorney-General will provide an urgent legal opinion to the Prime Minister before the Cabinet makes its final decision and will also consider the alternative ‘max-fac’ proposal, which critics have claimed the WTO might also challenge.

Johnson claims Iranian nuclear deal still ‘has value’
According to The Sun, Foreign Secretary Boris Johnson claimed last night that the nuclear deal with Iran still ‘had value’, as he held crisis talks with European and Iranian counterparts in an attempt to save the agreement after the USA pulled out.

Find out more about the benefits of Vuelio political services.