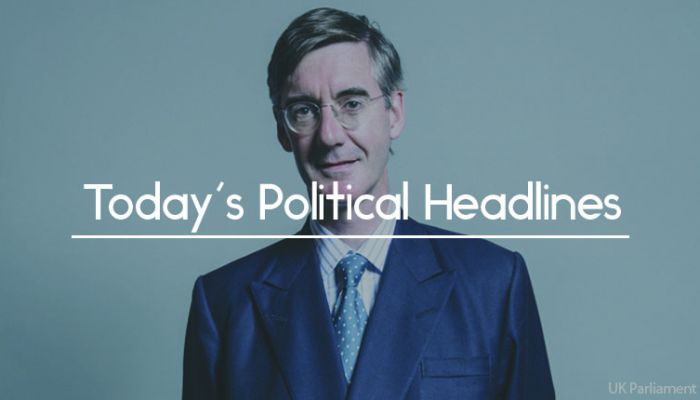 Today’s Political Headlines include May’s confrontation with Rees-Mogg, Corbyn ruling out a Norway-style Brexit, MSPs to vote against Brexit and the Home Office accused of shambolic incompetence.

May confronts Rees-Mogg at customs meeting
The Times claims that Theresa May ‘confronted’ Jacob Rees-Mogg at a meeting about customs after Brexit. The Prime Minister was meeting backbench Conservative MPs to outline the options for customs post-Brexit when the clash happened, with one Conservative MP saying that May ‘slapped him down very hard’. The Daily Telegraph claims that May admitted to MPs that negotiations have reached an ‘impasse’ as neither of her customs plans will work, increasing Eurosceptics’ fears that the transition period will be extended. As the BBC reports, EU chief negotiator Michel Barnier has warned that Brexit talks have made ‘little’ progress since March.

Corbyn rules out Norway-style Brexit
The Guardian says that Jeremy Corbyn has told Labour MPs that the party cannot consider a Norway-style Brexit, which would leave the UK as a ‘rule taker’. John Mann, who warned that Labour would lose seats such in his Bassetlaw constituency if it ‘watered down’ its Brexit position, said that the strength of feeling from other Labour MPs had killed off the EEA option. However, The Sun claims that Shadow International Development Minister Preet Gill has ‘risked the sack’ by calling for a ‘people’s vote’ on the final deal.

MSPs set to vote against EU (Withdrawal) Bill
The BBC reports that MSPs are set to formally refuse to give the Scottish Parliament’s consent to the EU (Withdrawal) Bill. The SNP are expected to be backed by Labour, Green and Lib Dem MSPs in the vote against the bill. The UK and Scottish Governments have been unable to reach an agreement over devolved powers after Brexit.

Home Office accused of ‘shambolic incompetence’
The Guardian claims that the Home Office has been accused of ‘shambolic incompetence’ after letter written by Caroline Noakes, the immigration minister, appeared to contradict what she told the Commons Home Affairs Committee about when she became aware of problems faced by highly skilled migrants. She claimed that the issue had been flagged up ‘two working days’ ago, but the letters suggest she was aware of the problem in February.

UK could withhold security clearance for firms working on Galileo
According to the Financial Times, the UK Space Agency has written to 13 British companies working on the EU’s Galileo satellite navigation system, warning them that the Government could withhold their security clearance to work on the project. The letter described the move as ‘a necessary consequence of the position taken by the European Union’.

Leaked letter shows incentive for benefit assessors to squeeze in more sessions
The Daily Mirror reports on a leaked letter which shows that disability benefit assessors employed by Atos have been given £50 rewards for fitting extra sessions into their day, which MPs fear could lead to tests being hurried and poor quality. Frank Field, Chair of the Commons Work and Pensions Committee, had written to the firm, asking it for more details.

Lords vote to start second part of Leveson inquiry
The Daily Telegraph reports that peers have voted to order the start of the second part of the Leveson inquiry of press standards, defying a vote by MPs last week. As a result, MPs will have another chance to vote on the issue, which the paper claims may be as soon as next Tuesday.

East Coast rail franchise to be terminated ‘in days’
The Financial Times reports that the Government will terminate Virgin and Stagecoach’s contract to operate the East Coast rail franchise ‘in days’, following heavy losses. Transport Secretary Chris Grayling has the option of temporarily nationalising the line, or negotiating a not-for-profit management agreement with the existing operator.

Find out how Vuelio political services can benefit you.