The Sunday political shows were dominated by two topics: the death of Tessa Jowell and Brexit.

Environment Secretary, Michael Gove was the most high-profile guest across the shows and he provided the biggest talking point by saying Theresa May’s post-Brexit customs plan has flaws.

The plan the Prime Minister is proposing would mean the UK has the same tariff on goods as the EU, but business will be able to claim back the difference if the rates in Britain are lower. Nick Robinson (standing in for Marr) asked Gove whether he agreed with Boris Johnson’s assessment that the arrangement proposed is crazy.

Gove said no model exists like the one being proposed and this immediately raises questions. Gove wants the Government to ‘crack on’ with finding solutions to these problems. Robinson asked Gove whether it was a possibility the transition period could be extended past December 2020; he answered, ‘I don’t believe in an extension’. He was also asked whether he thought the Brexit process was a shambles – unsurprisingly he replied it is not.

Arch-remainer Nicky Morgan appeared on Peston and she was not complimentary to either of the deals proposed. Morgan told Peston more information is needed on the matter but that the maximum facilitation deal relies on technology which does not yet exist and causes problems around Ireland. Morgan offered some hope to Theresa May by saying the Prime Minister could still offer a trade deal that would be accepted by the vast majority of the House of Commons if she stopped trying to appeal to the Brexiteers.

The Deputy Prime Minister of Ireland, Simon Coveney also appeared on Marr. Coveney wants the UK Government to come to an agreement on the customs policy so progress can be made on the border. Coveney made it clear that the Irish Government is not flexible on the matter of physical infrastructure on the Irish border. Coveney also said he is taking his lead from Theresa May and not any other member of the Cabinet. He had another warning for the UK Government by saying the Brexit negotiations would face a ‘difficult summer’ if the Government did not stick to its commitments.

Shadow Brexit Secretary, Keir Starmer said the option of a Norway-style deal for the UK would not work for the UK, the reason being Norway has physical infrastructure on its border with Sweden and this is not an option when it comes to the Irish border. Rebecca Long-Bailey also represented Labour on Peston and said no decision has been made on how to vote on a Lords amendment that would see the UK join the European Economic Area and stay in the single market. Long-Bailey said Labour wants to retain the benefits of the single market but through a bespoke deal.

There were many tributes to former Cabinet Minister, Tessa Jowell, who passed away. Alastair Campbell said she was the best in politics and the best in humanity. John Whittingdale paid tribute to her nonpartisan nature saying she wanted things to get done. On Marr, a clip was played of an interview Robinson had conducted with Jowell and it focused on the remarks ‘I am not afraid’ when speaking about the cancer she was ill with. 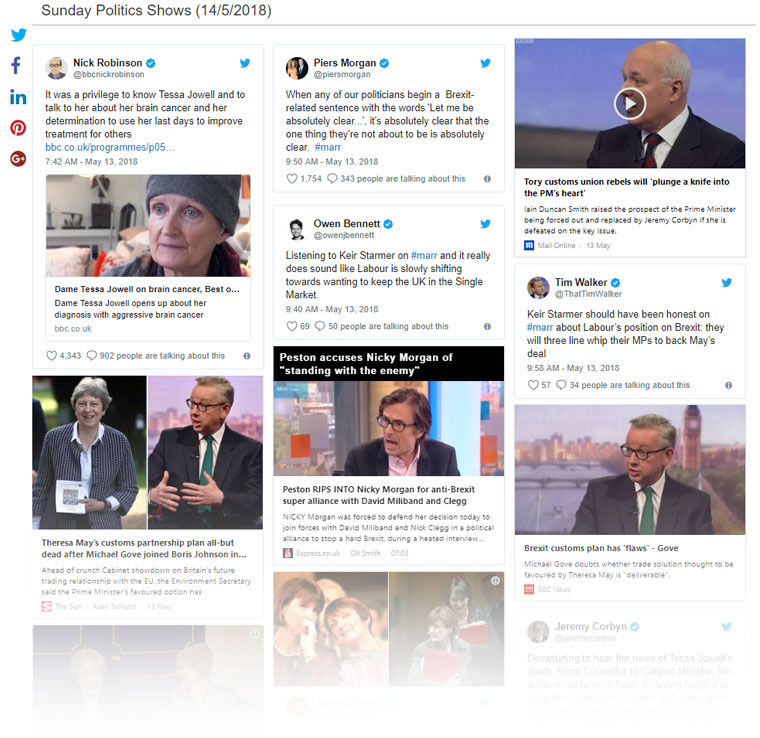