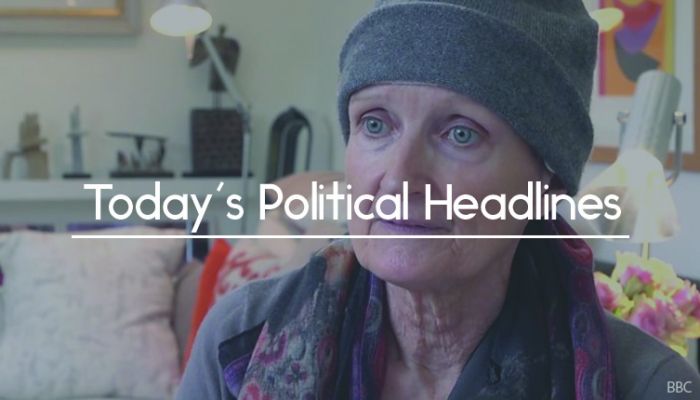 Politicians pay tribute to Tessa Jowell
The Guardian reports that politicians from across the political spectrum have paid tribute to Tessa Jowell following the announcement of her death yesterday. The Government has announced it will double its investment in brain cancer research to £40m and introduce a new test for brain cancer in all NHS hospitals, an issue Jowell focused on in the last months of her life, and spoke about to the BBC.

Gove casts doubts on May’s customs plans
Appearing on the BBC’s Andrew Marr Show, Environment, Food and Rural Affairs Secretary Michael Gove, cast doubt on Theresa May’s proposed post-Brexit customs partnership, which he said had ‘flaws’ and had questions about its ‘deliverability’. Labour’s Shadow Brexit Secretary Sir Keir Starmer told the programme that a customs union was the only solution. The Daily Mirror reports that David Miliband will share a platform with Nicky Morgan and Nick Clegg today, calling on MPs to vote down the Brexit deal if it is not good enough.

Head of MI5 to condemn Russia in speech today
The Times says that the head of MI5 is to deliver ‘Britain’s strongest condemnation yet of Russia’. Addressing European security chiefs in Berlin today, Andrew Parker, Director-General of the Security Service, will criticise the country for its ‘flagrant breaches’ of international law, blame it for the Salisbury poisonings and condemn its disinformation campaign. He will also call for a continued UK-Europe security partnership after Brexit.

Khan warns of new Windrush-style scandal
The Guardian reports that Mayor of London Sadiq Khan has warned that the Government may face another Windrush-style scandal, with children and teenagers born in the UK being left without access to education or employment owing to a £1,000 fee to gain citizenship. Khan has commissioned research to understand the scale of the problem and called for the Government to streamline the application process and waive the fees.

Erdogan calls UK a ‘valuable and reliable’ ally
The Times reports that President Erdogan of Turkey has called the UK a ‘valuable and reliable’ ally. He is in London for one of just two foreign visits while he campaigns for elections next month, and has promised to ‘co-operate more with the UK post-Brexit in every field’. He will meet the Queen, speak at Chatham House and meet investors.

Carillion used small suppliers to prop it up, MPs say
The Financial Times says that MPs investigating Carillion’s collapse have revealed new evidence showing that the firm used suppliers to ‘prop up its failing business model’. The final report is due to be published on Wednesday by the House of Commons Work and Pensions and Business, Energy and Industrial Strategy Committees.

Lords warned off attempts to resurrect Leveson
According to The Daily Telegraph, MPs have warned that attempts by the House of Lords to resurrect a second Leveson inquiry would breach the constitution and intensify calls for reform. Jacob Rees-Mogg has claimed that efforts by the Lords to salvage the inquiry would breach a convention which stops peers from ‘wrecking’ Government legislation.