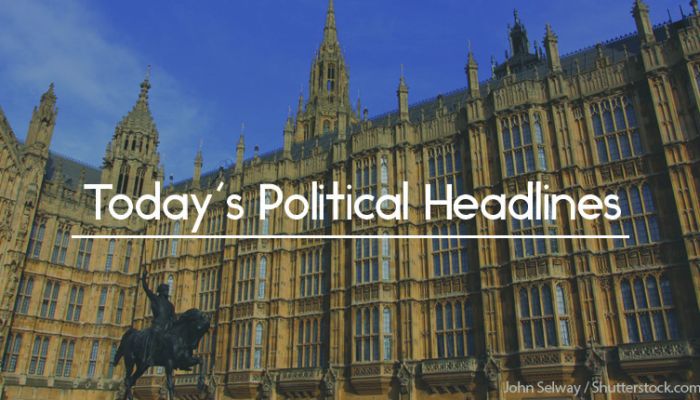 Today’s Political Headlines include Government defeat in the Lords (again), the Iran deal, Windrush errors and clashes over Northern Ireland.

Government defeated by peers in single market vote
The Guardian reports that a shock defeat for the Government in the Lords will lead to MPs voting on remaining in the European Economic Area. 83 Labour peers voted against the party’s whip on an amendment for continued membership of the EEA. The Times says that Boris Johnson has dared Theresa May to fire him, with friends indicating that he has no intention of resigning despite describing the Prime Minister’s favoured customs plan as ‘crazy’. The Daily Telegraph suggests that May could bypass deadlock over this plan by putting it to the full Cabinet, rather than its Brexit sub-committee. According to the Financial Times, the Department for International Trade will get an additional £10m to prevent the loss of trade promotion jobs.

UK remains committed to Iran deal, despite US withdrawal
The BBC reports that the UK has insisted that it remains committed to the Iran nuclear deal, despite the decision of US President Donald Trump to abandon it. In a joint statement with France and Germany, the Prime Minister said that the agreement ‘remains important for our shared security’. Labour accused the President of a ‘reckless, senseless and immoral act of diplomatic sabotage’.

Home Office warned about Windrush errors five years ago
According to The Guardian, the Home Office was warned that Windrush generation residents had been incorrectly classified as being in the country illegally as long ago as 2013. The paper says that this undermines claims made by the department that it had thought that only a small number of people were affected by the scandal.

Hugh Grant urges MPs to vote for press reforms
The Daily Telegraph says that Hugh Grant has been persuading Conservative MPs to vote for Labour amendments which the paper claims amount to ‘curbs on press freedom’. Grant held a series of one-on-one meetings, and ten Conservative MPs are considering rebelling against the Government. Writing in the paper, Digital, Culture, Media and Sport Secretary Matt Hancock claims that the measures would ‘undermine the freedom of our press’.

Abrahams ousted from Labour’s frontbench after bullying investigation
The BBC reports that Debbie Abrahams has been sacked as Labour’s Shadow Work and Pensions Secretary following an investigation into claims of workplace bullying. Abrahams, who was suspended from the role earlier this year, claims that the probe was ‘neither thorough, fair, nor independent’ and ‘strongly refutes’ the claims.

Heidi Alexander quits as MP
As The Guardian reports, Heidi Alexander is to stand down as the Labour MP for Lewisham East to take up the role of London’s Deputy Mayor for Transport, replacing Val Shawcross. The paper suggests that the Labour candidacy will prompt a battle between Momentum, trades unionists and Labour centrists, who control the local party’s executive.

Security firms could be banned from helping EU with Galileo programme
The Times claims the Government is investigating ways of banning technology companies from transferring sensitive information to Europe, if the EU blocks the UK from the Galileo satellite navigation system. The paper claims that there is ‘growing alarm in Westminster’ that the EU’s approach could threaten the future defence and security co-operation treaty.

Vuelio political services are available to discuss your political needs.