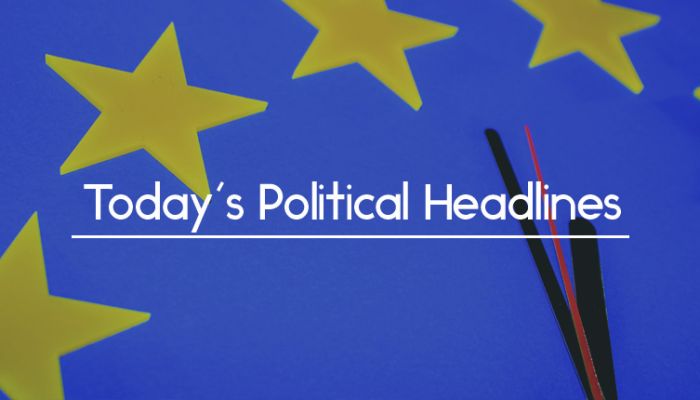 Brexiteers suggest extending transition to break customs deadlock
The Sun claims that Brexiteers, including Theresa May’s former special adviser Nick Timothy and allies of Michael Gove, are suggesting extending the Brexit transition period to break deadlock over customs plans. This would give more time for their preferred ‘maximum facilitation’ plan to be implemented. May was reportedly planning to use a meeting of the Cabinet’s Brexit subcommittee on Tuesday to adopt an amended version of her plans for a customs partnership, but the paper claims that signs of a compromise are emerging.

Government stops forcing NHS to share data with Home Office
The Guardian reports that the Government has suspended arrangements under which the NHS shared patients’ data with the Home Office so that it could identify people breaking immigration rules. Opponents had warned that the policy was scaring some people away from seeking NHS care. The change was announced during a debate on the Data Protection Bill, with the Government accepting an amendment tabled by Conservative Dr Sarah Wollaston (Chair of the Health Committee) and Labour’s Dr Paul Williams.

Labour attempt to launch part two of Leveson defeated
The Guardian reports that the Government managed to narrowly defeat a Labour attempt to start the second phase of the Leveson inquiry in a House of Commons vote yesterday. Digital, Culture, Media and Sport Secretary Matt Hancock hailed ‘a great day for a free and fair press’ but Ed Miliband accused the Conservatives of breaking a pledge to phone-hacking victims and of giving the DUP what it has called ‘a Leveson for Northern Ireland’.

Johnson pledges UK commitment to Iran deal
Foreign Secretary Boris Johnson told the House of Commons yesterday that the UK has ‘no intention of walking away’ from the Iran nuclear deal, despite the USA having pulled out. As the BBC reports, Sir Michael Fallon, Defence Secretary when the deal was signed, said that President Trump’s criticism of the ‘rather flimsy agreement’ was justified.

Tory MPs call for House of Lords to be overhauled
The Daily Mail says that ‘leading Tory MPs’ including Iain Duncan Smith, Bernard Jenkin, Jacob Rees-Mogg and Daniel Kawczynski have called for reform of the House of Lords after it amended the EU (Withdrawal) Bill 14 times. Duncan Smith called for a ‘complete and total overhaul’ while Rees-Mogg said that peers ‘are completely obsessed by the European Union.’

Williamson criticised over leak
According to The Times, ‘senior Conservatives’ and Number 10 have criticised Defence Secretary Gavin Williamson accusing him of playing politics with the Northern Irish peace process and leaking plans to set up a historical murders unit. The Daily Mail reports that service records of troops who served in the province are to be handed over to police.

May to face criticism over Erdoğan visit
The Financial Times says that Turkish President Recep Tayyip Erdoğan will start a three-day visit to the UK on Sunday, meeting both the Queen and Theresa May. The paper says the Prime Minister is likely to face criticism as the visit will be during snap elections which have been criticised by opposition and human rights groups.

Grayling announces digital railway overhaul
The BBC reports that Transport Secretary Chris Grayling is to announce a digital overhaul of the rail network. Network Rail will aim for 70% of journeys to benefit from digital technology by 2033, with new signalling improving frequency and capacity and reducing failures.

Find out more about Vuelio political services and how they can help you.