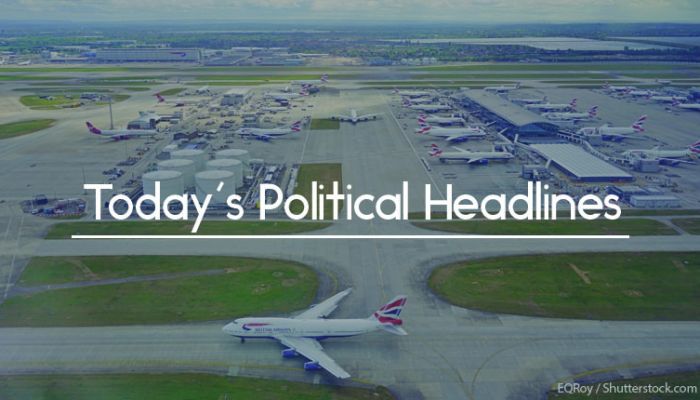 Today’s Political Headlines include the Heathrow third runway vote, Labour’s promise to end defence outsourcing, over 50 Tory MPs ready to block a no-deal Brexit and a former adviser to Theresa May calls to unlock home ownership for young workers.

Grayling calls on Tory MPs to back third runway
Writing in The Daily Telegraph, Transport Secretary Chris Grayling has urged his party’s MPs to back a third runway at Heathrow in today’s vote, arguing that Brexit means that the UK needs ‘to demonstrate clearly that out future lies very much at the heart of the world stage.’ Some Conservative MPs have criticised the absence of Foreign Secretary Boris Johnson, who had previously promised to prevent the scheme. The Guardian adds that Len McCluskey, General Secretary of Unite, has written to Labour MPs, calling on them to back the scheme, bringing him into conflict with the party’s leadership.

Labour to promise end to defence outsourcing
The BBC reports that Nia Griffith, the Shadow Defence Secretary, will promise in a speech today that a Labour government would end outsourcing of large defence contracts and criticise the performance of firms such as Capita and Carillion. The Daily Mail says that allies of Defence Secretary Gavin Williamson have claimed that dozens of Conservative MPs could vote to block the budget if defence spending isn’t increased.

Over 50 Tory MPs ready to block no deal Brexit
The Financial Times claims that ‘senior Conservative politicians’ believe that over 50 Conservative MPs, including some current ministers, are prepared to block any attempt by the UK to leave the EU without a deal. The paper also reports that Downing Street is trying to reassure businesses following dismissive remarks from two Cabinet ministers.

Former adviser calls on May to unlock home ownership for young workers
The Sun reports that Conservative MP Neil O’Brien, a former adviser to Theresa May, is calling for a million new houses to be set aside for workers under 40. A report by his new think tank, Onward, calls for half a million new homes to be built for rent to those under 40 with discounts of up to a fifth, and for Government support for 500,000 loans for deposits.

New research shows that over 30,000 children are in gangs
The Times says that new research shows that over 30,000 children aged between 10 and 15 claim to belong to gangs. Children’s Commissioner Anne Longfield warned that criminals prey on young people by ‘taking the place of society’, with analysis by her office showing that up to 70,000 under-25s could be part of a gang network.

No trade deal with US if geographical protections maintained, Paul Ryan warns
The Daily Telegraph claims that International Trade Secretary Liam Fox has written to Brexit Secretary David Davis, warning that he has been told by senior Republican Paul Ryan that a free trade deal with the US would not be possible if EU geographical indication protections for food and drink such as Champagne and Parma ham are maintained after Brexit.

Pro-Corbyn group launches campaign for a ‘people’s vote’ on the deal
The Guardian reports that a pro-Corbyn group is to launch a campaign for a ‘people’s vote’ on the final Brexit deal. The group, Labour for a People’s Vote, is led by former Momentum members and trade union leaders, with activists from 62 local parties pledging to raise the issue in a motion to Labour’s conference in September.

Don’t get caught out by politics – Vuelio Political Services create bespoke reports for your topics of interest.