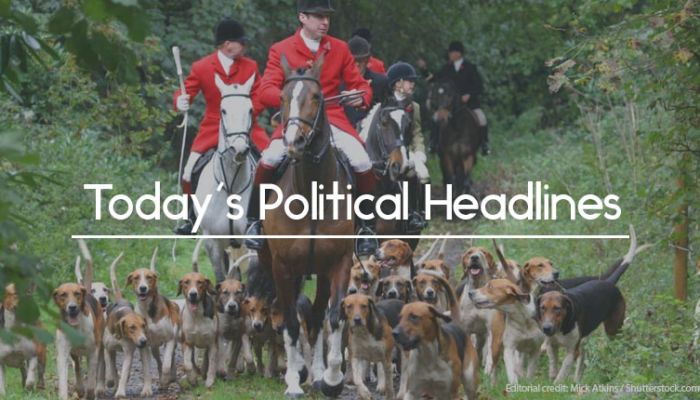 Hunt pledges to back the legalisation of fox-hunting
Jeremy Hunt has used an interview with The Daily Telegraph to back the legalisation of fox-hunting, claiming that it is ‘part of the countryside’. He also told the paper that if he became Prime Minister Boris Johnson would be given ‘a very important Cabinet job’ while MPs’ summer recess might be cancelled to ensure that all the legislation needed for a no-deal Brexit was passed. Writing in the paper, he argues that he is better placed than Johnson to defeat the ‘clear and present danger’ posed by Jeremy Corbyn.

Labour support at record low in new poll
A poll conducted by YouGov for The Times has found that support for Labour is at its lowest in polling history, with just 18% of voters planning to vote for the party. The Conservatives are 24%, the Brexit Party is on 23% and the Liberal Democrats are on 20%. The paper adds that Jeremy Corbyn met Cabinet Secretary Sir Mark Sedwill to discuss its story about civil servants raising concerns about Corbyn’s health, with Labour claiming that the meeting was ‘frank and detailed’ and that there will be an ‘independent element’ to the investigation.

Johnson announces plans for 20,000 more police officers
The Daily Mail reports that Boris Johnson will today promise to put 20,000 new police officers on the streets within the next three years, at a cost of £1bn a year. Johnson said that ‘soaring crime levels are destroying lives across the country and we urgently need to tackle this’, while the plan has been borrowed from former leadership candidate and Home Secretary Sajid Javid, adding to speculation that he may be made Chancellor by Johnson.

Foreign Office summons Chinese ambassador over criticism
The Guardian says that the Foreign Office has summoned the Chinese ambassador, Liu Xiaoming, to accuse him of making unacceptable criticisms of the UK. He had used a press conference to claim that remarks by Foreign Secretary Jeremy Hunt about the protests in Hong Kong were ‘interference’ and that there would be ‘consequences’ going further.

Lords call for £8bn to be spent on social care
The Financial Times carries details of a new report by the House of Lords Economic Affairs Committee, which calls on the Government to spend £8bn on social care immediately in order to fix what it calls a ‘national scandal’. It says that the system is ‘severely underfunded’ and that 1.4m adults cannot access adequate care, adding that the Government should publish a white paper containing ‘clear proposals for change’.

Supermarkets back simpler recycling labels
The Daily Telegraph reports that representatives from the supermarkets Iceland and Waitrose yesterday told the Commons Environment, Food and Rural Affairs Committee that the Government should introduce legislation to simplify recycling labels on packaging so that it is easier for consumers to understand.

Osborne considering running to be IMF head
The Times reports that George Osborne has told friends that he is considering campaigning to be the next head of the International Monetary Fund (IMF) now that Christine Lagarde, the incumbent, has been appointed as the head of the European Central Bank (ECB). To succeed, he will need to be nominated by the new Prime Minister, while his allies believe that his main rival is likely to be Mario Draghi, the outgoing ECB head.

Gauke attacks ‘populist politicians’
The Guardian says that Justice Secretary David Gauke used his speech at the annual judges’ dinner in the City of London to attack ‘populist politicians’ who tell people what they think they want to hear, contrasting judges’ fact-finding with those ‘who pour poison into our national conversation’. The paper says this will be seen as a ‘veiled attack’ on Boris Johnson.

The Tory leadership race is all about headlines now – but who will win? Find out with Vuelio Political Services.