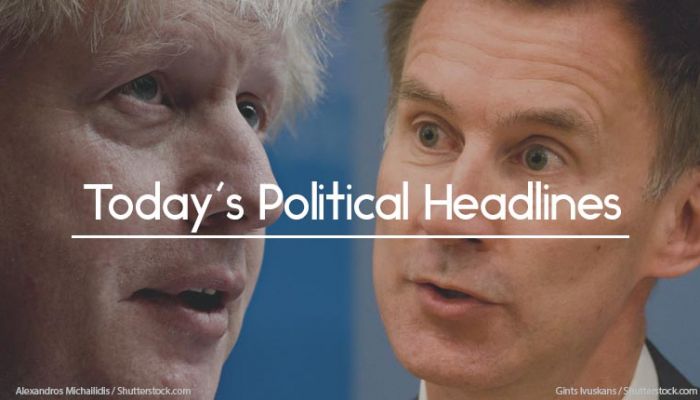 Johnson considers reducing number of Government departments
The Daily Telegraph claims that Boris Johnson is considering proposals to reduce the number of Government departments. He has already backed merging the Department for International Development and the Foreign Office but is now being urged to consider abolishing up to seven other departments, in a move backed by supporters including Dominic Raab, Andrea Leadsom and Priti Patel. A source in the campaign told the paper that such a decision would have to wait until after Brexit had been delivered.

Hunt accused of ‘spouting macho nonsense’ over plan to cancel civil servants’ holidays
The Times says that Jeremy Hunt was yesterday accused of ‘spouting macho nonsense’ by Dave Penman, head of the FDA union which represents senior civil servants, after Hunt threatened to cancel all civil service leave in August unless departments convinced him that their no-deal plans were ‘on time and on track’. Hunt also said that he would decide on 30 September whether a deal was likely, and if it wasn’t, he would cease all talks with the EU and would instead focus on preparing for a no-deal Brexit.

Corbyn calls for independent inquiry into report by The Times
The Guardian reports Jeremy Corbyn has asked for an independent investigation into a report by The Times which claimed that it had been told by senior civil servants that he would have to stand down due to health issues. Writing to Cabinet Secretary Mark Sedwill, Corbyn said the claims ‘undermined confidence in the principle of civil service neutrality’.

Hammond criticises candidates’ spending plans
The Times says that Chancellor Philip Hammond has warned that the spending plans announced by the Conservative leadership contenders are at risk of ‘throwing away’ his party’s ‘reputation for fiscal responsibility’. He warned that the £25bn ‘fiscal firepower’ held in reserve would be needed to tackle a no-deal Brexit and that the candidates risked ‘delivering a bigger burden of debt to our children and our grandchildren’.

Heseltine report calls for more powers for metro mayors
The Financial Times carries details of a new report by Lord Heseltine, commissioned by the West Midlands Combined Authority, which calls for metro mayors to have their budgets and powers increased. He makes twenty proposals to help narrow the gap with London, including overseeing affordable housing construction, school performance and employment training.

Bercow blocks attempt to prevent public spending after a no-deal Brexit
The Daily Telegraph reports that John Bercow yesterday blocked an attempt by Dominic Grieve and Margaret Beckett to prevent spending on education and international development in the event of a no-deal Brexit by refusing to accept their amendment. A similar amendment, covering work and pensions, and housing, communities and local government, will be ruled on today.

Local authorities warn of funding crisis
The Guardian says a survey by the Local Government Association shows that almost one in five local council leaders will be forced to put drastic spending controls in place in the next few months to avoid bankruptcy. One in three warned that they expected to be unable to meet their statutory obligations, such as adult social care, within the next three years.

Government considers mandatory climate risk reporting for listed firms
According to the Financial Times, the Government’s new green finance strategy, published today, will say that the Government is to explore introducing a mandatory requirement for listed companies and pension funds to declare their climate-related risks from 2022.

What would fewer departments mean for you and your comms? Find out with Vuelio Political Services.