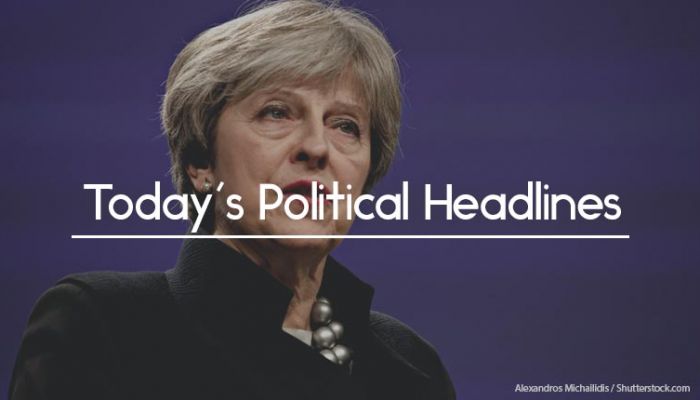 Today’s political headlines include the potential postponing of the Brexit vote, UK can cancel Brexit unilaterally, May could face leadership battle this week and no-confidence in Theresa May.

The Daily Telegraph says that Theresa May has held ‘crisis talks’ with EU leaders while she considers whether to postpone Tuesday’s vote on the Brexit deal. According to the paper, ‘her closest allies’ still don’t know whether she intends to go ahead with the vote as planned. The paper adds that some ministers have discussed holding a referendum between May’s deal and a no-deal Brexit, with no option to remain.

UK can cancel Brexit unilaterally
The BBC reports that the European Court of Justice has ruled this morning that the UK could cancel Brexit without the permission of other EU nations. However, the decision would have to ‘follow a democratic process’, so Parliament would need to approve any such move.

May could face leadership battle this week
The Times reports that Theresa May could face a leadership battle. Boris Johnson has set out plans for a further negotiation with the EU, while Sajid Javid and Jeremy Hunt are apparently sounding out potential supporters. The Sun adds that Javid could launch his campaign this week, and has been recruiting supporters for the last fortnight, telling one ‘senior Tory’ that May will be forced out when her deal falls and he will then declare his candidacy immediately.

Labour and DUP discussing no confidence vote in Theresa May
The Daily Telegraph claims that Labour has been holding discussions with the DUP about tabling a motion of no confidence in the Prime Minister, in the hope of uniting opposing factions against her. The party is reportedly concerned that tabling a motion against the whole Government would instead unite the different Conservative factions.

Brexit deal criticised by MPs
The Financial Times says that the Commons Brexit Committee has criticised the Brexit deal, accusing the Government of avoiding ‘hard choices’ and not offering ‘sufficient clarity or certainty about the future’. The committee, consisting of both Brexiteers and Remainers, also claimed that the plan had ‘no realistic, long-term proposals’ for the Irish border.

Ministers to be obliged to seek better fishing deal
The Times reports that Environment, Food and Rural Affairs Secretary Michael Gove is to announce a new legal obligation for ministers to seek a better deal for fishermen when they negotiate over rights after Brexit. The obligation is to be introduced as an amendment to the Fisheries Bill today.

Outsourcing firm seeks rescue deal
The BBC reports that Interserve, which is one of the largest providers of public services, is seeking a rescue deal. The firm is struggling with £500m of debt, but claims to be ‘making good progress’ on its long-term recovery plan, which will be announced in the new year.

Worried about the future of Brexit? Find out what happens and when with Vuelio Political Services.