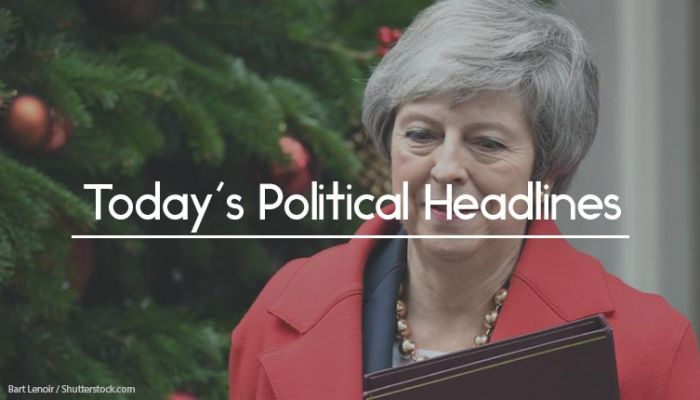 Today’s political headlines include May’s no confidence vote, May to be pressured into stepping up no-deal preparations, voters becoming more pessimistic and EU leaders snubbing May.

May to face vote of no confidence by Tory MPs
As The Daily Telegraph reports, a vote of no confidence in Theresa May as Conservative leader has been triggered, with the required 48 letters being received. Sir Graham Brady, chair of the 1922 Committee, has confirmed that the vote will be held tonight. The paper adds that former cabinet minister Owen Paterson put in a letter of no confidence last night, in which he claimed that the Prime Minister’s Brexit deal was ‘bad’ and a ‘betrayal of clear manifesto promises’, which treated Brexit as a ‘problem to be solved rather than an exciting opportunity to be grasped’.

May to be pressured into stepping up no-deal preparations
The Times claimed that Theresa May was to be put under pressure by some cabinet ministers this morning to step up preparations for a no-deal Brexit, including an emergency fisheries policy. It added that leadership contenders Sajid Javid and Boris Johnson have been preparing their pitches with pieces in The Spectator, with Javid telling the magazine about his commitment to social mobility and Johnson comparing his weight loss to Brexit.

Voters becoming more pessimistic about negotiations
The Guardian carries details of research by Britain Thinks, which finds that people are becoming more pessimistic about the state of the UK’s negotiations to leave the EU, including ‘die hard leavers’. Little consensus on the best way forward emerged from the research, with negative opinions of May’s deal and a dip in support for another referendum.

EU leaders snub May
The Daily Telegraph claims that leaders snubbed Theresa May during her tour of EU countries yesterday, with German Chancellor Angela Merkel telling her that there was ‘no way’ the agreement could be reopened and that negotiations must be conducted through the European Commission. May had reportedly told European leaders that she was considering delaying the vote on Sunday.

Corbyn accuses May of ‘demeaning her office’
The Guardian reports that Jeremy Corbyn accuses Theresa May of ‘demeaning her office’ and creating an ‘abject mess’ yesterday by delaying her vote on the Brexit deal to try and get concessions from the EU. He called on May to ‘immediately put her deal before the house’ if she came back with only ‘warm words’, and ‘let Parliament take back control’.

Peer retires after sexual harassment allegations
In an exclusive, The Sun reports that Lord Lester of Herne Hill is retiring from the House of Lords. Last month a committee had recommended that he should be suspended for sexual harassment and offering a woman ‘corrupt inducements to sleep with him’, but peers rejected the punishment and referred the case back to the committee.

Home Office reverses suspension of ‘golden visas’
The Financial Times says that the Home Office has reversed its decision to suspend issuing ‘golden visas’ to investors, less than a week after it was announced. The change of plan followed the receipt of a letter from immigration lawyers which warned that suspending the Tier 1 investor visa was illegal.

Osamor apologises for ‘emotional outbursts’
The Daily Mail reports that Labour MP Kate Osamor has apologised for what she called ‘emotional outbursts’. She resigned from the shadow cabinet two weeks ago after it was reported that she’d threatened a journalist who asked for comment about her employment of her son, who has been convicted of drugs offences.