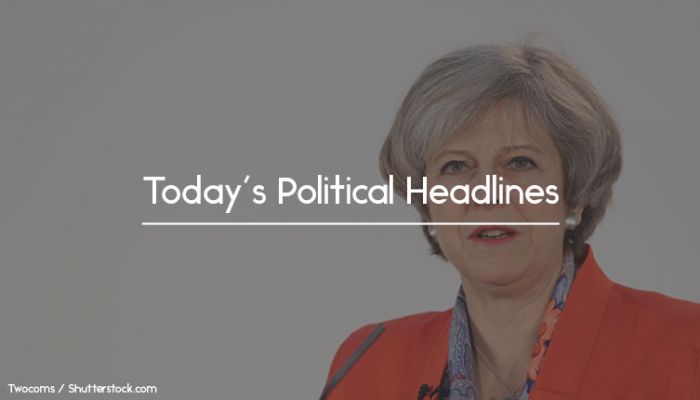 Today’s political headlines includes The Times’ claim that May is set to announce her resignation today, analysis suggesting that the Brexit Party could lead Rudd and Johnson to lose seats and a call for review after NAO raises concerns about visa revocations.

May to announce resignation today
The Times says that Theresa May is set to announce her resignation as Conservative leader today, allowing a new Prime Minister to take over by the end of July. She may, however, try to pass part of her Brexit deal during the interim period, and the leadership contest is not expected to start until 10 June, after President Trump has visited. Yesterday, the Foreign Secretary Jeremy Hunt told May to abandon attempts to pass the Withdrawal Agreement Bill.

Analysis suggests that Brexit Party could lead Rudd and Johnson to lose seats
The Daily Telegraph says that new analysis by Professor Matthew Goodwin of the University of Kent based on opinion polling shows that Tory MPs including Boris Johnson and Amber Rudd would lose their seats in a general election if support for the Brexit Party continues at its current levels. If the party secured 30% of the vote at a general election, the Tories would lose 113 seats, while 67 would be lost if it got 15%, still enough to mean that the Conservatives would be likely to lose power.

Call for review after NAO raises concerns about visa revocations
The Financial Times reports that Meg Hillier, Chair of the Public Accounts Committee, is calling on the Government to conduct a review, after the National Audit Office raised concerns about the fairness of the Home Office revoking 36,000 visas issued to students and workers based on allegations that they had cheated in English language tests. The report warned that the way the department acted meant that it was possible that some of those affected weren’t guilty and didn’t have an ‘adequate opportunity’ to prove their innocence.

Rory Stewart backs campaign to save Post Offices
The Daily Mail says that the International Development Secretary Rory Stewart is the first senior politician to back the paper’s campaign against Post Office closures. He said that they were the ‘hub of the community’, demanding that Government subsidies be continued after 2021. Theresa May said that she ‘recognised how vital’ they were, but promised no new actions to support them.

Government may be sued after some EU citizens are denied the right to vote
The Guardian says that the Government is being called on to investigate the treatment of EU citizens in the European elections, after many reported being unable to vote yesterday owing to clerical errors, in what Labour MP David Lammy called a case of ‘ugly discrimination’. A barrister warned that the Government might be sued over the issues.

Wellbeing should be the Government’s main aim, new report claims
The Guardian carries details of a new report by the All-Party Parliamentary Group on Wellbeing Economics, which is being launched by Gus O’Donnell, the former Cabinet Secretary. He is calling for personal wellbeing to be the main aim of Government spending, rather than economic growth. The report says the Government should use the spending review to boost spending on mental health services, schools and social care.

Government to be sued over air pollution
The Times reports that ClientEarth, which has already won three air quality court cases against the Government, is preparing to challenge it at the High Court for not acting on illegal pollution levels on 100 roads. This could force it to impose speed limits, build barriers or restrict older diesels.

Hain makes further allegations about Sir Philip Green
The BBC reports that Lord Hain has made further claims in the House of Lords about the conduct of Sir Philip Green, who he named last year as the person responsible for a legal injunction preventing details of sexual harassment and racial abuse being published. He quoted the complainant as saying that Green ‘was touching and repeatedly slapping women staff’s bottoms, grabbing thighs and touching legs’.

Is a new PM on the way? Stay up to date with instant alerts from Vuelio Political Services.