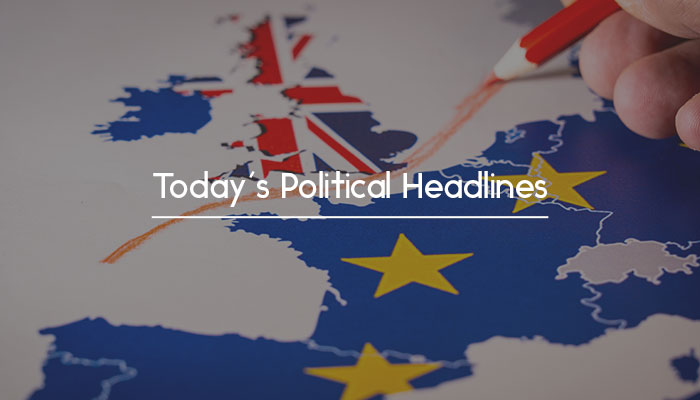 Brexiteer leadership candidates embrace no-deal
The Times says that Tory leadership hopefuls ‘have embraced a no-deal Brexit’ in order to tackle the threat posed by Nigel Farage. Dominic Raab called on the party to show ‘unflinching resolve’ to leave the EU, even if there wasn’t a deal, while Esther McVey said that cross-party agreement was ‘not possible’. They have been joined by other candidates, including Boris Johnson and Andrea Leadsom.

Corbyn increases support for second referendum
The Guardian says that Jeremy Corbyn has promised to back a referendum on any Brexit deal, following Labour’s losses in the European elections. He said that he was ‘listening very carefully’ to both sides, would prefer a general election, but that any Brexit deal would need ‘to be put to a public vote’. Labour sources said that this was a change in his position, with pressure coming from allies such as John McDonnell, as well as Tom Watson, the deputy leader, who has backed calls for a special conference or an all-member ballot on the issue.

Hunt warns that Tories risk ‘political suicide’ if they attempt a no-deal Brexit
Writing in The Daily Telegraph, Foreign Secretary Jeremy Hunt says that if the Conservatives attempt to carry out a no-deal Brexit, they will commit ‘political suicide’. The leadership contender argues that trying to do so would lead to a general election, the potential ‘extinction’ of his party, and the UK’s ‘first Marxist prime minister’.

Javid says he’s standing, as he ends charges to call 101
The Daily Telegraph says that Home Secretary Sajid Javid has formally declared that he will contest the Conservative Party leadership election, promising to be ‘always straight’ with voters and to ‘do my best’ for the UK as it had ‘done so much for me’. The paper adds that he will today announce the abolition of charges to call 101, which results in victims paying to report a crime.

Gove to promise EU nationals free citizenship
The Guardian says that Tory leadership candidate Michael Gove will promise the 3 million EU nationals in the UK free citizenship if he becomes prime minister. Alberto Costa, who has been championing citizens’ rights, said that Gove had ‘fully agreed to adopt my proposals’ and will ‘announce that it was wrong to put EU citizens on the negotiation table’.

More prisoners to be allowed out on day release
The Daily Telegraph reports that more offenders in open prisons will be allowed day release to do paid work in the community, as long as they pass a risk assessment by the governor. The Ministry of Justice says day release reduces reoffending. Justice Secretary David Gauke urged ‘businesses to join this movement and help ex-offenders turn their backs on crime’.

Northern Ireland’s Alliance Party elects MEP for first time
The Financial Times reports that the cross-community Alliance Party of Northern Ireland won its first European seat, taking the second of three in the region alongside the DUP and Sinn Féin. Party leader and newly-elected MEP Naomi Long said that  this was ‘a vote to have a “people’s vote”’. The seat she won was previously held by the Ulster Unionist Party.

Malthouse says that he is the change the public want to see
Housing Minister Kit Malthouse has used an article in The Sun to declare that he is standing to be leader of the Conservatives, revealing polling which shows that 56% of the public don’t want any of the Cabinet to replace Theresa May. He argues that this shows ‘a yearning for change’ and that he is ‘the new face’, and ‘from a new and talented generation’.